We Are Climbing Jacob’s Ladder

We Are Climbing Jacob’s Ladder 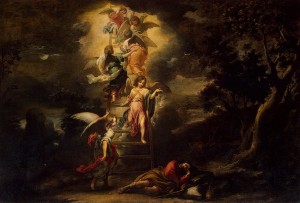 Today’s first reading at Mass was the story of Jacob’s Ladder. You remember the one–where he is traveling and he camps out by a shrine and take a rock from the shrine as a pillow?

He dreams of a stairway to heaven with angels going up and down. He wakes up and calls the place “Bethel”–the threshold of heaven.

The story is interesting on several levels. Firstly, it is an insight into the primitive religions of the ancient world. Here is a story which is about 4,000 years old. What was the religion like at the time?

There were many different animistic religions, but one of the most universal was the worship of the Mountain God. This God was often believed to be the greatest and most powerful. Very often his worship was associated with a volcanic mountain–a holy mountain–the Mountain of God.

Probably there was an element of both. Particular mountains became “Holy Mountains” because they spoke of the power of God because they were mysterious. If they were particularly high, or if they were volcanic with fire, smoke and earthquakes and terror, then the mountain experience both symbolized God, but also to climb the mountain was to get close to God.

Whether they were Mayan or Aztec or Babylonian or Assyrian or Egyptian–the primitive peoples seemed to build man made mountains on which to worship. They were used either as tombs or temples. 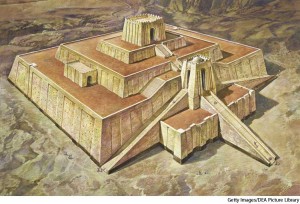 The ziggurats of Mesopotamia, like the Mayan and Aztec pyramids were built with a staircase on one side and with a temple at the top where the priests and often the royal family either lived or conducted worship or both.

Most likely Jacob’s dream of angels going up and down the staircase was set in the context of the ziggurats of Mesopotamia. The pyramid with the stairway on the front was the picture of a stairway to heaven.

So what does it matter, and why is it important?

Because it is a pointer to Jesus Christ. Remember the New Testament is hidden in the Old and the Old is made manifest in the New.

Remember that curious verse in the gospel where Jesus says, “Very truly I tell you, you will see ‘heaven open, and the angels of God ascending and descending on’ the Son of Man.” (Jn. 1:51)

Jesus is, no doubt, referencing Jacob’s vision, but in doing so he is using the imagery to say three things. Firstly, he is saying that he, Jesus, is the stairway to heaven. He is the bridge between God and Man. Secondly, if Jacob’s vision was in the context of a Mesopotamian ziggurat, the Jesus is also saying he is the temple of God. He is the fulfillment of the mountain god. Thirdly, he is therefore saying he is the fulfillment not just of Jacob’s Jewish religion, but the fulfillment and completion of all that was looked for and longed for within the pagan religions of the world.

This reveals, therefore the proper relationship of the non Christian religions to Jesus Christ. Just as he is the fulfillment and completion of the Jewish religion, so he is also the completion and fulfillment of all that was beautiful, good and true in the non Christian religions. In their own way–although they were also infected with much misunderstanding and error–they also were the means by which human beings quested for the truth and searched for God.

Therefore when Jesus says, “I am the Way, the Truth and the Life and no one comes to the Father except through me” we can see that in him all the religions of the world come clear, come clean, come forth and come true.