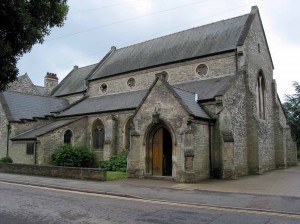 The Church of St Etheldreda, Ely

After a Saturday evening hike around London’s West End with dinner at in Chinatown we left on Sunday morning for the cathedral city of Ely where we visited the little church of St Etheldreda. Sunday morning Mass was about to start as we trooped in to venerate the relic of St Etheldreda–her mummified hand. The shrine of Etheldreda stood in the church of the once great abbey. The monastery and shrine of the saint were, of course, destroyed by Henry VIII.

This tour hammers home again the terrible cultural and religious revolution that took place in sixteenth century England. Henry VIII ravaged not only the Catholic Church, but an entire social and cultural network. The example of Ely and St Etheldreda was multiplied many times over. The magnificent abbey was destroyed, lands and properties confiscated, the shrine to the saint destroyed and her ancient relics burned. It was the same at Canterbury where Thomas a Becket’s shrine was destroyed and the abbey dissolved and ransacked.

After Ely we travelled to the delightful Oxbborough Hall–the fifteenth century home of the recusant Bedingfeld family. It was Corpus Christi Sunday. The family still live in the grand house, and as we were about to explore the famous priest’s hole we learned that there was to be a Corpus Christi procession. Sure enough, at 3pm there was a traditional procession with half a dozen priests and our numbers swelled the crowd considerably. Sir Henry Bedingfeld and his family took part in the procession and he kindly gave us permission to celebrate our Sunday Mass in the ancient chapel. 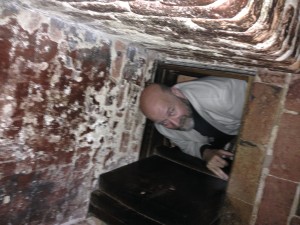 Padre clambering into the priest’s hole

The visit to Oxborough Hall was a complete joy. I will never forget clambering down the priest hold–the secret hiding place under a latrine with Joseph Pearce. Once in the bricked up hole in the wall. Joseph and I sang the Salve Regina together. Those outside heard us singing and said they had chills…and not because of the bad singing! 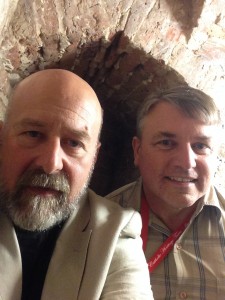 DL and JP in the priest’s hole

After Oxborough Hall we travelled further into the wilds of Norfolk to visit Walsingham. Walsingham is a story in itself and I’ll try to write more on it later. Suffice it to say it is the ancient shrine to the Blessed Virgin in England. Founded in 1061, it was also destroyed utterly by Henry VIII. A huge Franciscan Friary and Augustinian Friary left in ruins, the ancient image of the Virgin thrown on a bonfire. The shrine was restored by Catholics in the nearby town of King’s Lynn at the end of the nineteenth century and restored in Walsingham by the Anglo Catholics in the 1920s. The Catholic Shrine was re-established in Walsingham shortly thereafter.

On Monday morning we walked the Holy Mile from Walsingham village to the Slipper Chapel and Catholic shrine for Mass. It’s traditional to walk 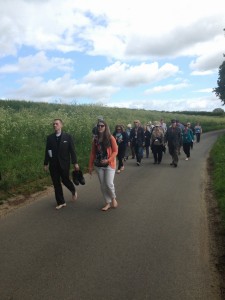 barefoot so we did–singing and praying the rosary and Divine Mercy chaplet as we walked through the beautiful countryside.

From Walsingham we visited the little village of Castle Acre with the ruins of a Norman castle, more monastic ruins–this time of a magnificent Cluniac priory. The village church of St James is a perfect example of late medieval church architecture with the amazing treasures inside of fifteenth century rood screen and pulpit paintings. This Ecclesiastical Anglophile was in heaven!

The church in Castle Acre also illustrated the great wave of church building which took place in England at the end of the fifteenth century. Eamon Duffy makes the point that with such an outburst of new church building, renovations and improvements of churches, abbeys, schools and colleges how could the Protestant propaganda that the medieval church was dead and decadent be true? Instead of the propaganda version that the church was crippled with corruption and about to perish, he shows in The Stripping of the Altars that the late medieval church was thriving.

We ended the day in Cambridge for a short walking tour and dinner.