I am the Immaculate Conception

I am the Immaculate Conception 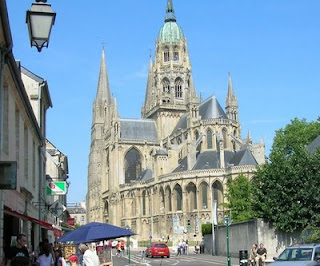 Roving Medievalist posted this picture of Bayeux Cathedral, and it brought back a memory. As an Anglican priest I was travelling in France, and took some time to stop at Bayeux. It’s a quaint town with this neat little cathedral, and a great museum where you can view the famous Bayeux tapestry.

I had been puzzling for some time over the dogma of the Immaculate Conception, and had come to the very Anglican conclusion that it was a permissable pious opinion. (This is an intellectual way of saying, “If that sort of thing gives you kicks, I guess it doesn’t do any harm.”) I still couldn’t figure out why the Catholics made such a big deal of it, and I didn’t see why I ought to believe it. In fact, even though I understood some of the logic of the dogma, and accepted that it didn’t do any harm, I just didn’t believe it. It hadn’t made that long journey from the head to the heart.

So there I was in Bayeux, and I went into the cathedral. I wasn’t consciously thinking about the Immaculate Conception. I was just interested in the architecture, the dark Catholic-ness of it all and was busy snooping around enjoying myself. I found a dusty little side chapel dedicated to Therese of Lisieux (who lived just down the road) and was bemused and a little pleased to find her fingerbone preserved in a reliquary there. I poked into a few other side chapels then, not paying much attention to what I was doing, felt inclinced to light a candle in one and kneel down to pray. I stayed there in silence for a fair time, just soaking up the stillness and the peace. I can remember thinking that the Catholic Churches had a lot more ‘presence’ than the Anglican Churches and put it down to the fact that I was in France and the French are good at that atmosphere stuff. (Now I realize the presence I was aware of was the Real Presence of Our Lord’s Body, Blood, Soul and Divinity)

Anyway, after a time I got up and left the cathedral, and as I walked out into the sunlight I suddenly realized that I believed in the Immaculate Conception. I still can’t explain it, except to say that it was a gift. Then as I walked down the street I also realized that the chapel I had knelt to pray in was dedicated to St Bernadette, who’s personal experience of the Blessed Mother did so much to convince the whole church of the veracity of this dogma.

This is why, in conversations with non-Catholics about Mary I try to explain as much as I can, but I also really understand why they don’t ‘get it.’ The veneration we have for Mary is something more than an affair of the mind. It is mostly an affair of the heart. We can explain and argue about our beliefs about Mary, but the beliefs are only part of the whole picture. In the end Mary takes us into a deeper relationship with Christ, and this deeper relationship could never happen if we didn’t first experience her love and her power in a personal way.

It’s simple. Do you want to understand what Catholics believe about Mary? Then open not only your mind, but your heart.