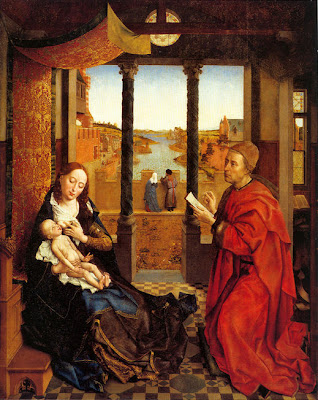 This is a theological painting. St Luke is writing his gospel as a result of the act of contemplating the mystery of the incarnation. The Blessed Mother–like the pelican– feeds the Christ child from her breast as a sign of her unity with her Son who will one day feed the world with the blood and water springing from his side.

St Luke writes the gospel which is his witness of the incarnation. Tradition has it that he was not only the gospel writer, but was also an artist, and that he produced the first icons of the Blessed Virgin. So the artist beholds the artist beholding the image–the icon–of God who is Christ the Lord. The author of the Word of God beholds the Word made flesh. The Mother and child is the mystery of the image of God in Man and woman. The second Eve holds the second Adam and presents him to the world.

The scene is set, not in Palestine in the first century, but in Flanders in the fifteenth century.  Why is that? Because the artist–Rogier Van der Weyden– wants to show that the mysteries he is portraying are timeless. They are alive in his own time. They are alive here and now in this present moment.

Finally, do you see the couple on the bridge in the background? Who are they? Two passers by. Christ the Son of God was incarnate and died for their salvation, but they are intent only on themselves–maybe they are courting– watching the river of life flow by–oblivious of the mysteries that are above and beyond and behind them–mysteries they can only come to know through the ‘sacrament’ of the Sacred Scriptures recorded by the Evangelist St Luke.