Two Arms of the Church: East and West

Two Arms of the Church: East and West 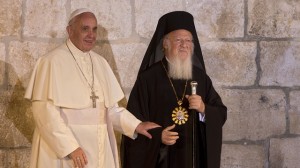 This week’s article at Aleteia comments on the Pope’s recent visit to Turkey and quotes Patheos blogger Billy Kangas on what the East can learn from the West and vice versa.

Both Pope Francis and Patriarch Bartholomew would agree that the Christian faith is more than simply helping the poor and working to end war and injustice. Repeatedly, Pope Francis has warned against the church becoming no more than another humanistic do-gooding charity.

The idea that the Eastern Orthodox and Roman Catholic churches might reach out with two arms to embrace the world is a positive way forward in the steady, but sure road to unity. To do this effectively, the Christians of the East and West must not only roll up their sleeves and work together, but they must also drop their suspicions and learn from one another.