Death, Judgment, Heaven and Hell?….So What.

Death, Judgment, Heaven and Hell?….So What. 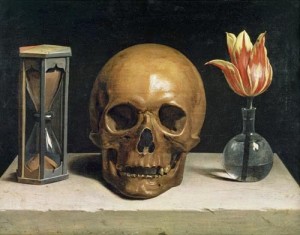 Deacon is busy publishing parish letters on the Four Last Things for the Sundays of Advent.

But it seems to me that the response of most people in our society and our church is a careless shrug of “So what.”

Not long ago I was looking at a picture of Saint Jerome with a skull and the Catholic kids looking at the picture said, “Gross! What’s the skull there for!?”

It was actually the right response.

You’re supposed to be shocked and alarmed at the skull in those old paintings and statues. It’s called a memento mori – a reminder that you will die.

While Advent is now re-packaged as a “time to look forward to Christmas, hang the lights, dress the tree, wrap the gifts and hum along to Bing Crosby” the fact of the matter is that in this winter season we also ought to face the facts of the grim reaper.

I’ve had this driven home to me strongly this year. My younger sister died on Easter Day. The last year of her life with a sad and valiant struggle with a nasty cancer was also the time when she completed her latest book, A Tour of Bones is already published in England and comes out here in the US next year. Denise was a renowned scholar and expert on the poet Thomas Traherne and had published three books about his life and work. Her last book was a departure prompted by the fact that she discovered that the house they lived in next to Worcester Cathedral had a medieval charnel house in the basement.

The place was full of human bones. Really.

This set her off on a trek to visit famous charnel houses across Europe. She ended up writing a brilliantly written book which is part travelogue, meditation on death and study of the resurrection. More about her book later on this blog when it comes out in the USA, but the book itself is like one long memento mori the fact that she completed it while dying is especially poignant, disturbing and alarming.

The reason our society is blasé about bones and in denial over death is because Christian preachers have been tiptoeing around the subject for too long now.

The new Calvinists with their belief in “eternal security” have left behind the stern strictures of their Puritan forebears and have now assured happy go lucky, well scrubbed suburban Christians that what this means is they are among God’s chosen ones and that they are headed for heaven no matter what. Therefore they have thrown out funeral services and have “Thanksgiving Services” for the departed who everyone knows is now “with Jesus”.

Catholics have gone the same re-assuring route. The twin heresies of universalism and indifferentism have seeped into Catholicism so that most Catholics now think it doesn’t really matter what religion you belong to because God is such a nice guy that he would never send anyone to hell and besides didn’t Jesus die to save the whole world and we’re all going to go to heaven right after we die right?

I’m afraid that’s not right and it is certainly not Catholicism nor is it (to be fair to our separated brethren) true Protestant Christianity either.

The old, old story is still the true, true story and that says that not only is death real, but so is judgement, the hope of heaven and the threat of hell.

Advent is therefore a time to face facts.

Christ is on his way, but it may not be the happy party everyone would like to imagine.

He is the Good Shepherd, but he is also the Righteous Judge. “Here come da judge.”

It does matter what religion you belong to. “No one comes to the Father but by me” says the Righteous Judge.

Universalism is false. Some people will not be saved. “Broad is the path that leads to destruction. Narrow is the way that leads to life and few there be that find it.”

So we had better snap to it says the prophet preaching to himself.

For me “Advent” is a nickname for “Adventure” and I want to set out on that quest to follow the map, fight the pirates and find the buried treasure–which is eternal life.

Read my latest book The Romance of Religion or buy it for somebody for Christmas.