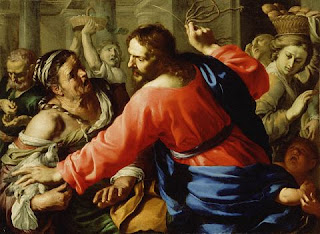 Do you know why the commerce in the temple was so bad? Not because you shouldn’t sell stuff in church. It’s because the Jews had to make sacrifice in the temple in Jerusalem. It couldn’t happen anywhere else. Furthermore, they had to sacrifice animals that were perfect. So here is what happened:

Good Jewish man comes to temple gates to sacrifice the little lamb he thought was perfectly acceptable. The temple guard checks it out..whoops it has a defect. He has to buy one of the approved ones which they have already inspected in the temple courtyard.

So your Jewish worshipper goes to buy his sacrificial lamb, but he’s not allowed to use the Roman currency because it has an image of the emperor on it which is a graven image and that would be blasphemous to bring into the temple, so he has to change the Roman money to Jewish shekels, which can only be done–you guessed it–at the official money changer table.

So he goes to change his money to buy his lamb to make his sacrifice and finds out that, too bad, the exchange rate is not so good and also the money change makes a commission on each transaction.

No wonder Jesus was hopping mad. They were making a killing out of the poor Jewish faithful who, by their own religious rules, had to make a sacrifice in that place in that way approved by those people who were all getting rich on it.