A Pope of Contradictions?

A Pope of Contradictions? 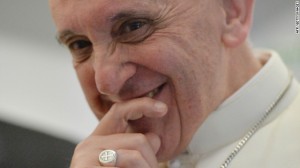 Vittorio Messori’s evaluation is that “this papacy oscillates continually between adhesion and perplexity,”

According to Messori, those average Catholics today are confused about which Pope Francis to follow. He offers three instances of what he sees as contradictions:

Messori’s message has been attacked by other Italians who believe he is speaking for himself, but putting the concerns into the mouths of “ordinary Catholics” who, they claim, are not concerned about the Pope at all.

I can speak for ordinary Catholics I know of and say that Messori’s observations are correct. Many Catholics are disturbed and confused by seemingly contradictory statements and style of Pope Francis.

My own view is that the Pope is his own man and preaches and lives the gospel with his own unique gifts. The precision and planned statements of the theologian Benedict XVI is what we were used to.

Francis’ own free wheeling style is more off the cuff, informal and easy going. I don’t think he wants us to take every word that drops from his lips at an infallible proclamation. We should get used to this Pope of Surprises and, on the one hand, not take all that he says very seriously while on the other hand taking everything he says very seriously.

What do I mean by this? Only that we should consider everything he says in the light of the whole teaching of the Catholic Church down through the ages. When it fits with that and is part of that we take his statements and gestures seriously as the successor of Peter. When he does or says something outside the box we should take it with a pinch of salt, put it into context, remember that it was off the cuff and let it slide.

That’s the way this pope is.