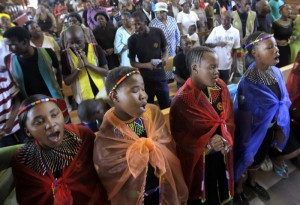 On the whole, the some 54 African bishops at the synod gained a reputation as a conservative voting bloc, wielding considerable influence in a synod of about 270 participants, as the Religion News Service reported. So unyielding were they, that Cardinal Walter Kasper bellyached in an interview—which he later tried to deny—that the Africans “should not tell us too much what we have to do.”

And the influence of the Africans might have been greater had not some of the smaller, ecclesiastically moribund countries been overrepresented, thanks to the papal appointments.

A striking contrast is between Belgium and Nigeria. Each got the same number of bishops—three—even though Nigeria has more than double as many Catholics as Belgium, a difference of 18.9 million to 8.5 million. And those figures actually understate the gulf between the two nations. In Belgium, just 5 percent of Catholics were showing up to Mass on any given Sunday in 2009 survey. In Nigeria, the rate is 92.2 percent.

I’m reading Cardinal Sarah’s God or Nothing at the moment and will review it before long on my other blog, The Suburban Hermit but suffice it to say that Sarah is remarkable. In many ways he’s like an African John Paul II. Brought up in poverty, immensely learned, a survivor of a cruel Marxist dictatorship, Cardinal Robert Sarah comes across not only as a strong defender of orthodoxy, but most importantly as a man of deep prayer. An ascetic and mystic he roots everything in prayer and the liturgy. Without the encounter with God in the liturgy all else is empty ideology. Continue Reading