All Are Welcome….To What Exactly?

All Are Welcome….To What Exactly? 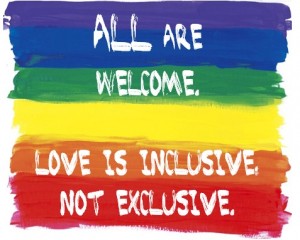 If you want to understand how the liberal Catholic views the world you can do no better than to take a moment to read this piece by Patrick Reardon at the National Catholic Reporter.

It’s called “A Church Refreshed: A dispatch from an American Catholic Future.”

The adolescent naivety (combined with graying hippie philosophy) of this article is astonishing.

Song leader Sophia Santiago stood to the right of the altar of St. Gertrude Church in Chicago and invited those in the crowded pews and in folding chairs to greet their neighbors. “All are welcome,” she proclaimed.

To the simple notes of a single piano, the parish choir and the congregation sang a sweet, lilting version of “Come to the Water” as liturgical dancers, altar servers, ministers of the word, parish chancellor Emma Okere and pastor Fr. Antonio Fitzgerald processed up the center aisle. The song filled the soaring interior of the 131-year-old structure. On a banner high behind the altar, in large, easily readable lettering, was a quotation from Pope Francis: “Who am I to judge?”

This was one of thousands of celebrations across the globe marking 50 years of rejuvenation and renewal dating from the election of Pope Francis in 2013, popularly called “refreshment of the faith.”

Reardon sees a Chicago Catholic church that has kept a few of those fusty old buildings with ” their stained-glass windows, gold ornamentation and other finery”,  but they’re supplemented by store front congregations with a preacher a piano and a soup kitchen.

In a strip mall a mile and a half to the south, another celebration was being held in a simple storefront. On the large glass window, hand-painted in red and blue, were the words “Lazarus Pastoral Center.”

“For I was hungry and you gave me food.”

Deacon Liam Saranof was reading the Gospel of Matthew to 27 men, women and children seated on folding chairs in the long, narrow space, the former home of an Ethiopian restaurant.

This strip mall was also the home to a bedding showroom, a Subway sandwich deli, a $10 store and a bicycle repair shop, all of them open on this early Tuesday evening.

A short time later, Saranof’s teenage son Karim opened up a small folding table in the center of the space, then carried over a small, brightly painted plastic box containing consecrated hosts that, a few hours earlier, had been delivered by one of the parishioners from St. Gertrude.

“Some of us here think of ourselves also as members of St. Gertrude,” machinist Chloe Pardo explained. “But others are only affiliated with the community here. They like the community work we do; they like how close we become.”

Reardon’s future church is complete with female “chancellors” who really run the show, Popes named “Martin” (after dePorres) and Oscar (after St Romero) and the two big slogans are “All Are Welcome” and “Who Am I to Judge?”

This article is a breath taking display of liberal insanity which I commented on here. This kind of feel good, fuzzy wuzzy Christianity has virtually wiped out Catholicism in America, so the obvious remedy is “We clearly didn’t have ENOUGH feel good, fuzzy wuzzy Christianity. So let’s destroy more old churches, write more banal hymns, put up more felt banners, hire more social workers and do more left wing posturing…”

I could write most of the morning on this, but will limit my comments to one observation: The increasingly ubiquitous slogan ‘All Are Welcome”

All are indeed welcome….but to what exactly?

The obsession with inclusivity is something mouthed by Cardinal Marx who said, ““Nobody is excluded [from the church],” he said. “Nobody is superfluous. Exclusion is not in the language of the church.”

Total inclusivity can only be proposed by a church that is used to being a wealthy establishment institution. “All Are Welcome” is the slogan of Christian leaders who know they are on the top of the social heap and feel guilty about it. They live in their palaces: (BTW did you know that Cardinal Marx also spent $13m refurbishing his palace and another $11m on a guesthouse in Rome. Go here.) and their middle class rectories but they proclaim “All Are Welcome” to salve their consciences and make themselves feel like good Christian folk.

My question remains, “To what exactly are all welcome?”  Continue Reading