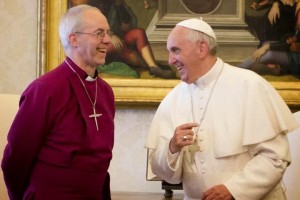 Far be it from me to rain on anyone’s parade, but the fifty years of ecumenical talks have been a resounding disappointment. I’m sure it must be a very good thing for theologians to sit around in a nice library somewhere and ponder how they can stretch ideas and twist words to come up with an agreement on theology, but these talks usually don’t get anywhere.

Of course it is better to have the talks than not to have them, and yes, we are in this for the long game. Maybe 500 years from now there will be fruit of these talks, and yes, unexpected things happen in the ecumenical movement. The Anglican Ordinariate–is arguably–one of the results of these talks….not in a direct way, but in a sure and certain way these talks shed light on the real situation and helped some Catholic minded Anglicans to join the Tiber Swim Team.

At first glance, however, it is difficult not to be cynical.

When I was an Anglican the ecumenical theologians would come home from their latest confab with the Catholics and sometimes they would be waving some new doctrinal agreement which they hoped would be voted on and approved at the Church of England General Synod.

As soon as it hit the table the “agreement” would be dissected by both the Evangelical Anglicans and the Progressives. It would then be thrown out, and in typical polite Anglican style no one would say anything. It would all just quietly be shelved and treated as a somewhat interesting historical document.

Along with the diplomatic negotiations we should also be a bit more brutally honest. The Evangelical Anglicans are Protestant. They make polite noises about Catholics, but they do not understand Catholicism, nor do they wish to. The typical Evangelical Anglican’s attitude to Catholicism is similar to their attitude to Hindus: it is a foreign religion that has some interesting historical and cultural aspects and it is all well and good if you like that sort of thing.

I realize this sounds like extreme language, but believe me. I was a priest in the Church of England and I know how these people work. It’s all good manners, polite noises and smooth smiles on the outside. On  the inside they can’t stand Catholicism and have no desire to be Catholic.

Those Anglicans who are of a Catholic mentality in the Church of England are now a dying breed.

The ecumenical discussions continue of course, and so they should, but increasingly they remind me of those meetings called “detente” between the Russians and the Americans. You may remember them. The Russian and American leaders would meet in Iceland or somewhere for “talks”. Nobody gave an inch, but they all came out and posed for the cameras, shook hands, smiled and spoke vaguely about “moving forward gradually and making progress”

In the meantime they were watching and simply waiting for the other side’s eventual collapse.