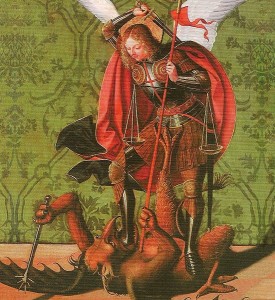 St Michael and All Angels. Today’s feast day reminds me of that section in C.S.Lewis’ science fiction books where his hero Ransom discusses the reality of the angel-like beings the Eldils. It’s a cool argument.

He suggests that the Eldils (angels) are invisible to humans not because they are less real, but more real.

What does that mean?

To understand we have to look again at the way we normally perceive the world. We see the physical world as solid and “real”. Therefore we regard spiritual beings as ephemeral or insubstantial. We imagine that they are all wispy like clouds or ghosts.

However, for angels it is the other way around. Because they are  eternal and do not have physical bodies, it is our physical world which is ‘unreal’ or insubsantial to them.

To us they appear to move through solid objects in our world, and we conclude that the objects are real and the Eldil/Angels are unreal. Ransom argues that it is the other way around. The Eldil are the solid ones and our world is made of shaky, fuzzy stuff compared to them.

Imagine that a man steps through a wall of fog. If you didn’t know otherwise, you might imagine that the fog was solid and the man insubstantial. Instead, of course, it is the fog that is nothing but gas, and the man is solid. Same with the Eldil-Angels–they step through the stuff of our world not because they are less real, but because they are more real and it is our poor physical world of shifting atoms and molecules that is transient, ephemeral and transparent.

If this delightful fancy is true, then it means heaven itself is more real than we can imagine. C.S.Lewis follows this up with his picture of heaven in The Great Divorcewhere each raindrop can pierce the unsubstantial souls, every blade of grass slices their feet and every apple is too heavy to lift.

Sweet Saint Therese saw the same truth. She said “In heaven each grain of dust is a diamond!”