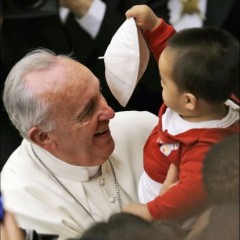 My article for Aleteia this week focusses on Pope Francis’ heart of compassion, and how this attractive trait can be both a strength and a seeming weakness.

Sick children also draw his compassion, “This breaks my heart.” The pope said, “When I see those creatures I say to the Lord, ‘Why them and not me?’” Likewise, visiting young people in jail makes the pope aware of his own weakness. He always thinks, “‘I could be here.’ In other words, none of us can be certain that we would never commit a crime, something for which we’d be imprisoned.”

His public compassion has endeared him to millions worldwide. People feel they can connect with him and that he understands their joys and sorrows. However, Pope Francis also admits that his big heart can get him into trouble.  The problem is his mouth opens just as much as his heart does. He sees problems and sometimes acts first and thinks later. Pope Francis said in the interview, “I am fairly fearless; I act without thinking about the consequences. Sometimes this creates headaches because I’ll say more than I should.”