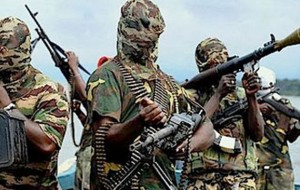 …this would seem to be the message the world’s media is trumpeting in the wake of the silence over 2,000 slaughtered by the Boko Haram in Nigeria. London’s Guardian paper asks why the massacre in Baga has been ignored.

France spent the weekend coming to terms with last week’s terror attacks in Paristhat left 17 dead. The country mourned, and global leaders joined an estimated 3.7 million people on its streets to march in a show of unity. In Nigeria, another crisis was unfolding, as reports came through of an estimated 2,000 casualties after an attack by Boko Haram militants on the town of Baga in the north-eastern state of Borno. Amnesty International described as the terror group’s “deadliest massacre” to date, and local defence groups said they had given up counting the bodies left lying on the streets. Reporting in northern Nigeria is notoriously difficult; journalists have been targeted by Boko Haram, and, unlike in Paris, people on the ground are isolated and struggle with access to the internet and other communications. Attacks by Boko Haram have disrupted connections further, meaning that there is an absence of an online community able to share news, photos and video reports of news as it unfolds.

The world’s secularist media responded so hugely to the seventeen deaths in Paris because their people were killed. Nigerian Christians? Meh. They’re not real people. 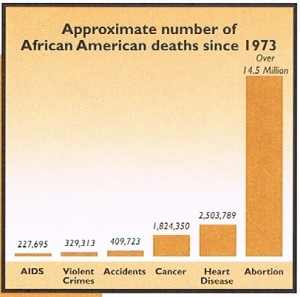 The same color blind problem exists in the abortion movement in the United States. Abortion is a kind of black genocide in the US. Black babies are more disposable than white babies.

Abortion is the biggest killer of black Americans by far.

What we don’t admit is that the deaths of 2,000 Nigerian Christians or millions of unborn African Americans is uninteresting to us.

Why is this? Because they are invisible and therefore less real.

The news media is increasingly selective, choosing to report evil and good as it sees fit, weighing the reports according to their own previous bias and bigotry. Even the politicians in Nigeria are ignoring the problem because it reflects badly on them. But guess who is speaking out? The Catholic archbishop.

Ignatius Kaigama, the Catholic archbishop of Jos in central Nigeria – an area which has also suffered terror attacks – added his voice to criticism of the west. Speaking to the BBC, he argued that Nigeria could not confront the threat from Boko Haram alone. “It is a monumental tragedy. It has saddened all of Nigeria. But… we seem to be helpless,” he said. “Because if we could stop Boko Haram, we would have done it right away. But they continue to attack, and kill and capture territories… with such impunity.”

The Catholic Church is the one organization that has a global reach and a global voice.

We need to speak up for them, but also continue to ask why those who have louder voices and bigger megaphones than ours remain silent.

Why, for example, have we heard nothing. Nada. Rien. Zilch from our own leadership?

Where is the State Department?

Why is the White House silent?

As an African American himself with family  roots in Africa why is the President so uncaring?

Does he also think that black people are not real?