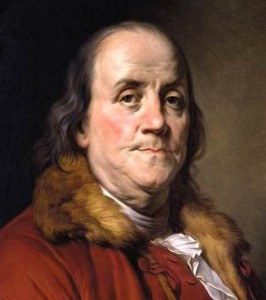 Like most Freemasons, Franklin had a spiritual blind spot. There was nothing wild and mystical in his life. Passion and romance in religion were alien to him. His creed was one of common sense, mild-mannered good works and human virtue. As such it was not only blind. It was bland.

I came across a quotation of his the other day which sums it up. He wrote, “The way to see by faith is to shut the eye of reason.” It is the sort of sophomoric bromide one expects from rationalist,  and it doesn’t stand up to even the mildest of objections.

It is understandable, however. Ever since the nominalists suggested that material things had no connection with the unseen world and were no more than what you call them, a divide had been growing between the physical and the metaphysical realms. The Protestant Revolution confirmed the break, and the Enlightenment hammered it home with the French and American Revolutions.

If there was a divide between the spiritual and the physical realm, then preachers could have nothing to say about science, and scientists had no concern with religion. Science and reason dealt with this world and religion with the world to come, and that was that.

Consequently, the Protestant religion became either an abstract debate about theology or a subjective, emotional experience. In other words, you could be a bookish Bible nerd or a hellfire, “come to Jesus!” weepin’-and-wailin’ preacher. Neither had much to do with the material realm, and neither had much use for science and reason. Thus Benjamin Franklin’s conclusion that to “see by faith is to shut the eye of reason.”