Can a Nazi Mass Murderer Be Forgiven?

Can a Nazi Mass Murderer Be Forgiven? 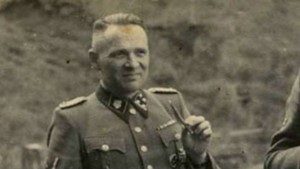 I have been busy today about parish business, but I wanted to write a bit more about this story I contributed to CRUX. The story recounts how Rudolf Hoss, the commandant of Auschwitz and the one who actually devised and put into action the gas chambers and crematoria had been brought up as a strict Catholic. Then before his execution he issued this confession and expression of remorse:

My conscience compels me to make the following declaration. In the solitude of my prison cell I have come to the bitter recognition that I have sinned gravely against humanity. As Commandant of Auschwitz I was responsible for carrying out part of the cruel plans of the ‘Third Reich’ for human destruction. In so doing I have inflicted terrible wounds on humanity. I caused unspeakable suffering for the Polish people in particular. I am to pay for this with my life. May the Lord God forgive one day what I have done.

This article at Aleteia gives an even more detailed account of his imprisonment and the priest who came to minister to him.

Someone commented that they are not Catholic and would not want to be part of a religion that would forgive such crimes.

This raises a good question, and I am surprised that my article did not receive more negative comments. Therefore I would like to discuss this interesting case further.

First, one has to ask, “If forgiveness is not possible or desirable, what are the other options?” There are really only three options. The first is to seek revenge, but of course the cycle of revenge then never ends. The killing only goes on and one. The second option is retribution. The terrible criminal receives the final punishment of the death sentence. In the case of Hoss this too place and he accepted his just punishment. The third option is that one simply tries to forget it all, but of course that is not only impossible, but it is a passive way of actually excusing the crime.

Forgiveness, therefore is the only creative and positive option. However, the person commenting that they would not want to belong to a religion that would forgive such a crime probably misunderstands the Catholic concept of forgiveness. We do not have a sentimental or unjust theory of forgiveness. Forgiveness is granted, but the price for the crime must still be paid. The criminal is not let off scott free. We call this the “temporal punishment” for the crime.

In the case of Hoss he was still tried, convicted and executed. Continue Reading