Can a Catholic Support Trump’s Wall?

Can a Catholic Support Trump’s Wall? 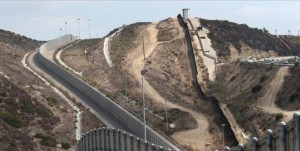 Over at CRUX John Allen speculates on how the American bishops might push the envelope over immigration reform. He suggests that the American cardinals and Archbishops might make another visit to the Mexican-US border like the one Cardinal O’Malley made in 2014.

You might remember the Cardinal took advantage of a photo op and gave communion to some folks through the slats of a fence. It was an emotional and manipulative picture to be sure, but it was powerful and it made a point: is the wall really necessary?

Allen was talking with Cardinal Turkson about the Trump presidency and immigration. Turkson said that the American bishops would have to take the lead. Allen writes:

All of which raises this question: Given that the Vatican is waiting for the U.S. bishops to take charge, and given that we all know gestures usually speak louder than words, is it time for a dramatic gesture from the U.S. bishops to demonstrate how serious they are about resisting the deteriorating climate for immigrants and refugees under the Trump administration?

In terms of what that might be, one can imagine multiple possibilities. I’m going to float one idea, however, which is just on the outer cusp of plausibility.

Suppose it wasn’t just one cardinal who led brother bishops in celebrating a Mass at the border. Suppose it was all six residential cardinals in the United States – Timothy Dolan of New York, O’Malley of Boston, Donald Wuerl of Washington, Joseph Tobin of Newark, Daniel DiNardo of Galveston-Houston, and Blase Cupich of Chicago?

Suppose, too, the cardinals were joined by a good chunk of the archbishops who lead the other 30 dioceses in the United States – Archbishop Charles Chaput of Philadelphia, for instance, and William Lori of Baltimore, not to mention the indispensable voice in American Catholicism on this issue, Archbishop Jose Gomez of Los Angeles?

Such a gesture might make an impact, but what exactly do the American bishops teach about the immigration issue? The Bishop’s Conference issued a statement in 2013 on immigration reform which you can read here. At the heart of the document the bishops voice two essential principles:

The Catholic Catechism instructs the faithful that good government has two duties, both of which must be carried out and neither of which can be ignored. The first duty is to welcome the foreigner out of charity and respect for the human person. Persons have the right to immigrate and thus government must accommodate this right to the greatest extent possible, especially financially blessed nations: “The more prosperous nations are obliged, to the extent they are able, to welcome the foreigner in search of the security and the means of livelihood which he cannot find in his country of origin. Public authorities should see to it that the natural right is respected that places a guest under the protection of those who receive him.” Catholic Catechism, 2241.

The second duty is to secure one’s border and enforce the law for the sake of the common good. Sovereign nations have the right to enforce their laws and all persons must respect the legitimate exercise of this right: “Political authorities, for the sake of the common good for which they are responsible may make the exercise of the right to immigrate subject to various juridical conditions, especially with regard to the immigrants’ duties toward their country of adoption. Immigrants are obliged to respect with gratitude the material and spiritual heritage of the country that receives them, to obey its laws and to assist in carrying civic burdens.” Catholic Catechism, 2241.

This doesn’t necessarily mean they must support the building of Trump’s wall, but they could be more supportive of a whole range of initiatives that secure the border not only for American citizens, but also for those who wish to immigrate–doing so legally and avoiding the human traffickers and criminals who take advantage of the immigrants. Border control is not only to keep criminals out. It is also to establish safe zones and proper procedures to welcome immigrants safely.

Is the wall necessary?

Certainly a security wall or fence could be part of a sensible and far reaching immigration reform which fulfills both of the bishops essential principles. The bishop’s 2013 document also goes on to suggest six ways the two principles might be enacted. I like them all, but I like the last two best…

Enforcement: The U.S. Catholic Bishops accept the legitimate role of the U.S. government in intercepting unauthorized migrants who attempt to travel to the United States. The Bishops also believe that by increasing lawful means for migrants to enter, live, and work in the United States, law enforcement will be better able to focus upon those who truly threaten public safety: drug and human traffickers, smugglers, and would‐be terrorists. Any enforcement measures must be targeted, proportional, and humane.

Many people are reacting to the proposal of a wall with strong sentimentally based opposition. Surely a wall–in and of itself–is not necessarily racist, ugly and exclusive. It depends how a physical barrier is combined with other forms of immigration control, and how it could be used to filter those who we should rightly welcome.

My personal opinion is that the idea of a couple of thousand miles of a “great big beautiful wall” is not particularly racist or oppressive. It’s just dumb.

Why build a wall? Can’t the same objectives can be obtained by a combination of many other far less obtrusive and expensive security measures?