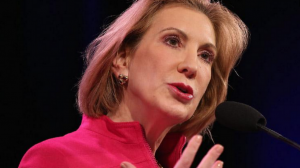 Virtually all commentators have declared Carly Fiorina the winner of last night’s debate between Republican candidates.

The lady is poised, articulate, passionate and well informed. Her high points were her fiery denunciation of Planned Parenthood in which she called out Hillary Clinton and Barack Obama–daring them to watch the videos published by the Center for Medical Progress. She also scored against Donald Trump with her classy put down on his insult about her appearance. Her comment on drug abuse–that she and her husband had buried a daughter who died as a result of drug abuse was moving and powerful.

Where does she stand on religious issues, and can Catholics support Carly?

Others have commented that the Republican field is stronger this time around than it has ever been. Most of the eleven candidates on the stage and a few in the second string are strong, articulate, informed and experienced candidates.

There are also more Catholics in the race than ever before. Catholic candidates are Jeb Bush, Chris Christie, Bobby Jindal, Rick Santorum and Marco Rubio.

This article outlines a few points about Fiorina’s Christian beliefs. Carly Fiorina was raised as an Episcopalian and doesn’t seem to have a strong church connection at the present time. She takes positive conservative stances on most issues, is very strongly pro-life but takes a measured stance on same sex marriage–basically supporting the law of the land and civil and financial rights for homosexual people while also holding to the personal belief that marriage is between one man and one woman. She also defends freedom of religion and the right for citizens to object to same sex marriage and be free of persecution for doing so.

On the negative side, some observers critique her record as a business leader, her lack of experience in elected office and are worried about her positive perception of the Ottoman Empire as a “great civilization”. They are waiting to hear more about her views regarding radical Islam and the crisis in the Middle East.

When measuring what politician to support Catholics should weigh up all the issues and should not vote on a single issue. They should also not vote for a candidate simply because they are Catholic. Obviously a good non Catholic is better than a CINO (Catholic in Name Only)

Catholics should educate themselves about core principles of both individual morality and social responsibility and vote for the candidates who are most likely to uphold the principles that encourage personal virtue, support the family,  and exercise proper restraints, peace and true justice for all.

My personal opinion is that, like many others, Carly Fiorina is mighty impressive. Her lack of political experience counts against her, but if she were teamed up with a strong Catholic candidate like Rubio, Bush Santorum or Jindal it could be dream ticket for Conservative Catholics.