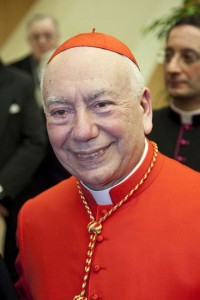 Deacon Kandra reports here that Cardinal Coccopalmerio has suggested that Anglican orders may not be “absolutely null and utterly void” as declared by Pope Leo XIII.

In a recent book he writes, “When someone is ordained in the Anglican Church and becomes a parish priest in a community, we cannot say that nothing has happened, that everything is ‘invalid’,”

Deacon Greg says that the Cardinal is “one of the Vatican’s top legal minds.” If this is the top what’s the bottom?

The cardinal has set up a scarecrow–a straw man. Nobody was ever suggesting that in an Anglican ordination nothing has happened and that everything is completely worthless.

After I converted to the Catholic faith people asked, “But what about your Anglican orders? Are you saying they were worthless? Were you not a priest?”

My answer was, “There is much that is worthy, good, beautiful and true in the Anglican Church. Catholics admit this and embrace it. We also thank God for all the graces that flowed to us in our Protestant experience. I’m not sure what my Anglican ordination consisted of, but what I do know is that I was not a Catholic priest. I was an Anglican priest.”

The church teaches that Anglican orders are null and void but it does not teach that they are worthless and meaningless. The proof of this is that they make an exception for men like me to be ordained and allow the ordinaries of the ordinariate to wear pontificals. If our orders are not only null and void but worthless, then why recognize that there is something different about us from laymen?

Therefore, if our orders were null and void, but not worthless and meaningless, Leo XIII’s definition leads us to ask, “Well, what is actually happening at a Protestant ordination?”

The question then remains–if Anglican orders are not Catholic orders what are they?

But that should be for the Anglicans to tell us–not for us to tell them.

We tell them–“Your orders are not valid Catholic orders. Now you tell us what you  think they are.”

And that is where the problem becomes even more confusing because the Anglicans themselves don’t know what their own priesthood is.

They have no shared ecclesiology, no shared sacramental theology, and no shared theology of ministry or ordination.

An Anglo Catholic will pretend that he is “a Catholic but in the Anglican Church.” He believes he is a sacrificing priest confecting a true sacrament.

But an Evangelical Anglican will strenuously deny that he is a sacrificing priest and will intentionally repudiate such an idea that he is any kind of priest at all. Indeed he will insist that he is a “minister of God’s word.”–and so he is.

I suspect Cardinal Coccopalmerio–like most Catholics outside of England–has very little experience or understanding of Anglicanism at all, and is merely making ill informed, subjective and sentimental comments about the subject. The only Anglicans he has met are the ones the Anglicans send him–intellectual somewhat Anglo-Catholic diplomats who know how to talk Catholic when they need to.

Of course there are good Anglican priests who love Jesus and do good work. Nobody has suggested that their lives and faith are futile and worthless. But them being nice enough chaps who love Jesus is not the same thing as having valid Catholic orders.

Coccopalmerio’s dodgy theology of orders has a deeper, darker foundation, and this become clear in his further words on the subject:

The cardinal’s mindset is deeply relativistic.  He writes, ““We have had, and we still have a very rigid understanding of validity and invalidity: this is valid, and that is not valid. One should be able to say: ‘this is valid in a certain context, and that is valid another context’.”

The cardinal should be careful not to cut off the branch on which he is sitting.

After all, if Anglican orders are maybe valid sometimes and maybe not valid other times depending on the context, then the same can be said of the authority of Catholic Cardinals.