Don’t Fall Into the Scapegoat Trap

Don’t Fall Into the Scapegoat Trap 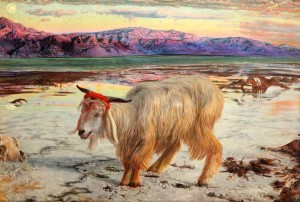 Don’t fall into the scapegoat trap.

In the Old Testament the scapegoat was literally a goat onto whom the people projected their sins. The goat was then sent out into the wilderness to wander alone until it died of thirst or was devoured by the wild beasts.

Here’s the passage from Leviticus 16 where this is commanded as part of the Old Testament religious ritual.

“When Aaron has finished making atonement for the Most Holy Place, the tent of meeting and the altar, he shall bring forward the live goat. 21 He is to lay both hands on the head of the live goat and confess over it all the wickedness and rebellion of the Israelites—all their sins—and put them on the goat’s head. He shall send the goat away into the wilderness in the care of someone appointed for the task. 22 The goat will carry on itself all their sins to a remote place; and the man shall release it in the wilderness.

There is a powerful symbolism here because this is what we automatically do within our families, within our schools, our parishes and our larger communities. We  project our fears, insecurities, sins, anger and rage on to an innocent victim. We put our trash on that other person or group of people.

Everybody finding somebody to blame, and the instinct is always with us and it is always of the devil.

Be wary of falling into the Scapegoat Trap.

Be especially wary of any religious or political leader who plays on this instinct. One of the weird things I am unhappy to find among some traditionalist Catholics, for example, is anti-Semitism. No it is not right to blame the Jews for the world’s problems. No it is not right to spin conspiracy theories about how “the dirty Jews” control the politics, the media and everything. No it is not sane to imagine that all your enemies are either Jews, Jew sympathizers, in the pay of the Jews or are secret Jews.

Now it is the Muslims.

If you are inclined to scapegoat all Muslims. Stop. Stop and think. Inform yourself. Read this article about Islam by a Christian Islamic scholar.

You don’t have to like Islam. That’s okay, you can  understand and be opposed to the negative things about the Islamic religion and culture, but do not demonize all Muslims. Continue Reading