Episcopalians Use Koran For Church Readings

Episcopalians Use Koran For Church Readings 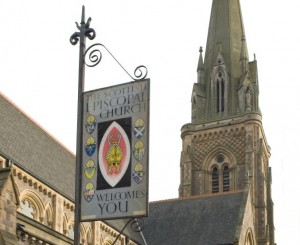 This time it is the Scottish Episcopalians.

As this article relates details about the Epiphany service at St Mary’s Cathedral in Glasgow.

The congregation at St Mary’s cathedral heard the Muslim version of the Virgin Mary’s conception of Jesus, from the Koran’s Sura 19, sung by Madinah Javed. The passage explains how Mary gave birth after an angel told her God would give her a child.

Muslims believe Jesus was a prophet, and that He was a precursor to Mohammed rather than the Son of God.

Sura 19 states that Mary was “ashamed” after she gave birth, and that the infant Jesus miraculously spoke to her from his crib and claimed he was “a servant of God”.

It denies Jesus was the Son of God.

The article goes on to quote the parish website’s report on the event: “Christians are not the only ones who honor Jesus.”

That’s true enough. Just about everybody except Satanists “honor Jesus” but it is only Christians who are supposed to worship him as the incarnate Son of God, the second person of the Holy Trinity, incarnate of the Virgin, God from God, Light from Light, Very God of Very God, Begotten Not Made, Consubstantial with the Father by whom all things were made.”

This is the sort of shallow silliness that continues to give the Anglicans a bad name. To get an idea of the present mood at St Mary’s Cathedral here is a quote from their website about how they identify…

As Catholics it seems that we are to overlook such travesties and continue the ecumenical “dialogue”with the Anglicans and Lutherans and never, ever be so rude as to bring up such egregious offenses.

If we do bring them up the bottom lips go out and the big pout starts and we’re accused of being racist. If we shut up,  however, things only go from bad to worse.

One further thought before I end my rant: “Would any Muslim at all–even the most liberal of Muslims–entertain the idea of having a Christian girl get up in the Mosque and sing a reading from the gospel of Luke?”

Should any Christian ever get a chance to read a passage from Scripture in the mosque I hope it will be Galatians 1:8