Does Everybody Live Happily Ever After?

Does Everybody Live Happily Ever After? 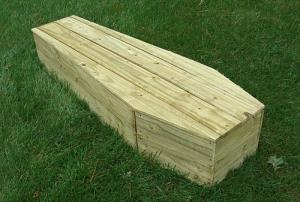 Excuse me for being critical of the USA, but it always happens after I return from Europe.

But seriously, have you ever noticed how so much of American culture is like one big trip to Disneyland?

Its like everybody is expected to be happy and healthy and smiling and successful all the time.

Now far be it from me to be a spoil sport, a party pooper or one to rain on anybody’s parade, but its not realistic is it?

There are many example of this flight from reality, but one of the most notorious is our attitude to death. Evelyn Waugh’s vicious  account of the undertaker’s business in American The Loved One highlights American’s attitude to death with biting satire.

But there is more to it than the endless euphemisms, cosmetics and the soothing artificiality of it all. The sentimentality surrounding death is also, in Christian circles, where the heresy of universalism is most often displayed.

What do people say when someone dies? Usually something like, “Well, she is in a better place now” or “Now all her pain is gone and she is with Jesus in heaven.” or “He was too good for this earth. Now he is with the angels.” or “My dear Henry is an angel now.” or the Protestant Biblical version, “To be absent from the body is to be present with the Lord.”

This indicates two heresies: universalism- “Everybody will be saved and go to heaven” and the Protestant doctrine of eternal security.

Yes, I understand the need to comfort the bereaved, but it is not actually much comfort if it is untrue. I accept that Calvinistically influence Protestants believe in the doctrine of eternal security and they do not believe in purgatory so they must believe that their loved ones are with Jesus in heaven because the alternative is too terrible to consider. Likewise universalists don’t really believe in either purgatory or hell, so of course they will dish out sentimental nonsense about “She is in a better place now.”

So a smidgen of Protestant theology combined with a sentimentally unrealistic culture combines to produce this saccharine approach to death.

The fact is they may not be in a better place now. They might be in a worse place.

Something else in this matter has come to my attention recently. A friend told me that increasingly in Baptist type churches they don’t have funerals. Instead they cremate the person’s body and they have a memorial service that celebrates the person’s life. Then the ashes are disposed of in whatever way the family desires–sprinkling them at sea or on a mountaintop (I can’t get that scene from the Big Lebowski out of my mind) or just burying them.

So instead of moaning and groaning, here is the truly Catholic approach to death. Continue Reading