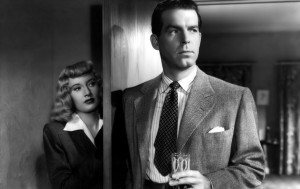 My article this week at Imaginative Conservative is a discussion of morality in movies–using two examples of film noir to show how good and evil can be treated in filmic storytelling.

The smart thing about film noir is that we identify with an ordinary good character who is drawn into evil. We are thrilled as we share his fear of being caught, and we dread the punishment with him. The intriguing part of Double Indemnity is that we see ourselves as ordinary people like Walter Neff, and as we plot and scheme along with him, we realize that we have within ourselves the same sort of deviousness and cunning that led a “man next door” into murder.

Although it deals with adultery, insurance fraud, and murder, Double Indemnity is a moral movie. As we go down into the dark with Walter Neff, we see that every other moral value suddenly slips and slides away until we are “at the edge of the grimpen where there is no foothold.” Like Raskolnikov in Dostoevsky’s Crime and Punishment, Neff is sucked into the moral morass as fast as a worm down a hole, until destruction is his only end.