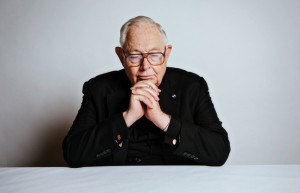 A pioneer has crossed the river.

Fr James Parker has died. Fr Parker was a priest of the Diocese of Charleston, but his priesthood was historic. He was one of the married Episcopal priests who petitioned Pope Paul VI in 1978, requesting a dispensation from the vow of celibacy so that they might be ordained as Catholic priests.

Paul VI died before he could answer the letter, as did John Paul I. It was John Paul II who received the request and said, “Be generous to these men.” So the Pastoral Provision was set up whereby former Episcopal priests could re-train and apply for a dispensation from the vow of celibacy in order to be ordained as Catholic priests. Fr Parker was among the very first to receive that permission and be ordained.

The first men to walk this path (and their wives) came from across the USA. They didn’t know what they were doing and the bishops who were courageous enough and creative enough to encourage them were also in the dark. Jim and Mary Alma corresponded with them, sent them text books, advised the bishops how to deal with Rome and were there when the office for the Pastoral Provision was set up. Jim then continued his work encouraging and assisting the convert clergy as an assistant to Cardinal Law–who was put in charge of the Pastoral Provision.

Eventually the Pastoral Provision office opened the way for some married former Lutherans and a few Methodists to also be ordained. Jim Parker was there to assist them and work with them–all the while being an active and much respected priest in Charleston Diocese.

I met Jim when my path led me to Charleston in 2001. In that year I was accepted as a candidate for the priesthood, and Jim made contact. It would be another five years until the right job opened up in the diocese, and at that point Jim guided me through the necessary exams, made sure my paperwork was in order and he and MaryAlma befriended me and Alison and welcomed us to the Diocese and to the strange world of being a married Catholic priest (or married to one.)

Jim was a Southern gentleman of the old school and he and MaryAlma were, in many ways, the typical South Carolina Episcopalians. MaryAlma was a smart, well educated woman with a sharp wit and a glint in her eye. As a “Vicar’s Wife” she was one of the models for my alter ego, Humphrey Blytherington’s wife Daphne. Jim was a man who sauntered and strolled, and always had an amusing anecdote and a funny story to hand. I was sitting next to him in the bishop’s house one day for lunch and the woman who was serving the meal came around at the end offering fruit from a fruit bowl. Jim smiled at her and said, “I’m sorry, I never accept fruit from a woman.”

There was a moment before the daughter of Eve got the joke, but the laughter soon circulated. Fr Jim Parker was a good man and a good priest.

May he rest in peace and rise in glory.