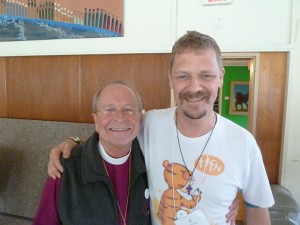 CRUX carries an AP story reporting that President Obama has invited a whole range of religious leaders to the White House to meet Pope Francis.

Among those who confirmed their attendance at the White House reception are the Rev. Joel Hunter, an evangelical megachurch pastor from Florida who is a confidant of Obama on spiritual matters; the Rev. Leith Anderson, president of the National Association of Evangelicals, which represents about 40 conservative Christian denominations; and the Rev. Samuel Rodriguez, president of the National Hispanic Christian Leadership Conference, a major US Latino evangelical group that, along with the US Roman Catholic bishops, has pressed lawmakers for immigration reform.

Among them is the Episcopal Church’s first homosexual bishop–Gene Robinson.

Also in the audience will be Episcopal Bishop Gene Robinson, the first openly gay Anglican bishop who’s now a senior fellow at the Center for American Progress, a think-tank with ties to the Democratic Party, and Sister Simone Campbell, executive director of the Catholic social justice lobby NETWORK, and a leader of the “Nuns on the Bus” advocacy tours.

Robinson’s story is well known. He’s the guy who not only divorced his wife Boo, so he could marry his boyfriend, but he went with his wife to the church where they were married and made up a ceremony in which they “released” one another from their vows. Then Bishop Gene (who also struggles with alcoholism) “married” his boyfriend Mark Andrew and later divorced him too.

There will be thousands at this “audience” with Pope Francis and it’s doubtful that Gene Robinson will be in the line up to meet Pope Francis personally, but I wouldn’t be at all surprised to see him maneuvered into place for a photo with the Pope which will the mainstream media will then publish with the caption, “Pope Francis and Gay Bishop: Who Am I to Judge?”