God in the Details

God in the Details 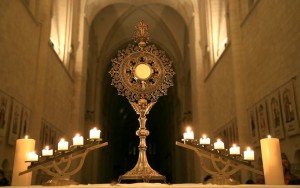 After leading a parish pilgrimage to Italy and dealing with family and parish matters I have been very busy and not had time to blog very much.

There has been nothing too dramatic, but the usual mixture of celebrating the sacraments, administering a growing and busy parish and school, ministering and trying to find more time to spend with people.

In the midst of this, celebrating daily Mass I had the chance to meditate a bit further on the Catholic priest’s life. I celebrate the daily Masses ad orientem— this gives me the chance to pray the Mass focussed more on God and not looking at the people all the time. The reality of the Mass hit home at a gut level. By the ‘reality’ of the Mass I meant that there was a certain certainty–a concreteness and solidity to it all. The conviction that HERE was reality. Here was the eternal made real in this present moment.

Returning from Italy where I said Mass at the tomb of St Francis, the tomb of Catherine of Siena and the tomb of St Peter, there was also the strange awareness of transcending time. Here I was in a Romanesque styled church building in South Carolina at the beginning of the twenty first century wearing the robes of a Roman patrician, celebrating a Mass rooted in the liturgies not only of the ancient church, but further back–rooted in the Scriptures and liturgies of the Jewish people. Here the ancient principle of sacrifice was still being celebrated with solemnity and seriousness in a world blind to the reality of what was happening at the altar.

While the faith seemed so ancient and rooted in antiquity it was also tremendously alive and fresh. Here was life. Here was youth. Here was Spring. One of our new converts was in attendance–having come from the Assemblies of God–he has found his way into the Church. I said to him afterward, “Stay with this. The Catholic Church will sometimes seem to you to be full of human failure, incompetence, futility, fighting and frailty. But there is great treasure hidden in that muddy field. There is a great pearl buried in the dark depths of that chaotic sea.

Furthermore, it is in the nitty gritty details of it all that God is not less real, but more real. Gerard Manley Hopkins observed that the Son of God became locked into the ordinary world. He who made the heavens and earth learned to be a carpenter. He who created the human race in such love became one of his own. He who is beyond time became locked in time. He who was great focussed on what was small.

In a time of silence I saw again that this life is the heart beating–hidden within the vulgar and flashy affairs of humanity. Hidden in something small is all that is great, and if we would find God we must always stoop down for he is below us.