Has the World Gone Pope Crazy?

Has the World Gone Pope Crazy? 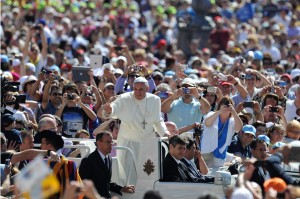 A couple of priest friends of mine–I’ll call them Father Gary and Father Larry– who are cradle Catholics– were chuckling about the Pope’s visit last week.

“That’s right.” Fr Jerry pitched in, “Then the Pope talks about the devil, says same sex marriage is evil, meets Kim Davis and says women can’t be ordained. Then the liberals are howling and the conservatives are delighted.”

“And you converts!” Fr Larry said jokingly, “You get all worked up about the pope either because you love him or hate him. You should take a deep breath. He’s just the pope. We have good popes. We have bad popes. We have mediocre popes.”

He shrugged, “I’m a cradle Catholic. I’ve seen popes come and go. The pope is just the pope. He’s not God. He’s not an oracle of the Holy Spirit. He’s not the Great High Poobah or the Almighty Monarch of the Glen. He’s the Pope. He’s the successor of Peter, the Vicar of Christ and the Head of the Church on earth–but he’s still just the pope.”

Fr Larry was making a good point, and an ironic one. Isn’t it strange in this democratic age of “the people” that everybody seems to have gone pope crazy?