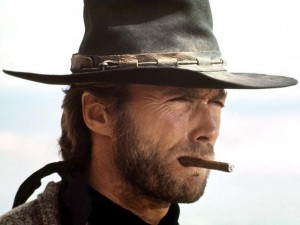 I am not really what they call a party animal and have never understood the human need to celebrate a calendar date.

The turn of the New Year, however, does cause me to pause.

I want to give the New Year one of those squinty eyed, cheroot chomping, Clint Eastwood type silent stare downs.

I want to look again at my life and cut all the crap.

I want to get down to business and stop wasting time and being such an egotistical jerk.

I said to Mrs Longenecker just the other day, “People think I’m so good and hard working for Jesus and the church, but they don’t realize that most everything good that I do that appears good is either because I want to win other people’s affection and approval or because I want to feel good about myself. In other words all my religiosity and stuff is pretty much just an ego trip.”

She was silent so I said, “I see you do not disagree with my analysis.”

That’s why when the Lord says, “Judge not” one of the people we shouldn’t judge is ourselves. Its very difficult to really know our motivations. We are deceitful sons and daughters of Eve and the people we lie to most of all are ourselves.

So I want to give myself that square jawed Clint Eastwood glare and tell myself to get on with it before its too late.

So Clint in me is saying,

“Listen punk. Live for God and for the Catholic faith and not for anything else.

Be tough on yourself for once instead of self indulgent.

Load your gospel gun, take aim and do business with the devil.

Really pray. Cast out into the deep instead of paddling around in the shallows.

Look at other people instead of yourself and see your need in theirs.

And time’s wasting. Do all of this before its too late you fool.”