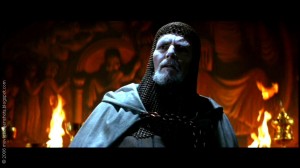 Do you remember that climactic scene in the third Indiana Jones film?

The Nazi sympathizer points a gun at Indiana Jones and says, “It’s time to ask yourself what you believe Dr Jones.”

This is the situation the citizens of the secular West must ask themselves.

In the first two movies Indiana Jones is pursuing treasure for “fame, glory and wealth”. Then he confronts he Nazis who follow a supremacist, Fascist ideology.

They are willing to do anything to take over the world by use of force.

They point a gun at Indiana Jones, and only then is he forced to ask himself what he believes.

We are at the same point in Western society. The fascist Islamic ideologies are point a gun at our heads and saying, “It’s time to ask yourself what you believe.”

It is very interesting that the Shadow Home Secretary of the UK, a fellow called Hilary Benn–has asked himself what he believes–at least about radical Islam

In this speech he lays it out very clearly. They are fascist ideologues who will stop at nothing to asset their power and their ideology.

He says the UK must step up and proceed with military efforts to eradicate this evil. Take time to watch the speech. It’s pretty amazing.

It is also pretty clear that our own president has no intention of engaging with ISIS in any muscular way, and his reluctance to do so only adds weight to those who believe he has been an Islamic sympathizer from the beginning.

However, the need to ask ourselves what we believe is more important than simply asking ourselves whether we think ISIS should be eliminated.

We in the West must also ask ourselves what we believe about our own religion, our world view, our concept of God, the world, time and everything.