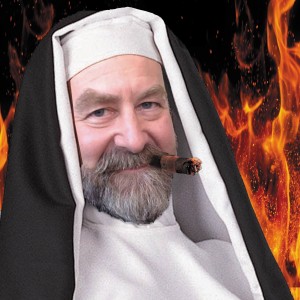 OK. I know it sounds dumb, but I’ve always wanted to be a nun. You know what I mean? So when that Jenner guy decided to be a girl I says to myself, “What the heck! Go for it man!”

Then when they made him “Woman of the Year” I just about choked on my stogie. “That does it.” I said to myself. “It’s time I made my dreams come true and become a nun.”

So I went round to my local convent and talked to the Sister Superior. She’s called Joan Chister. I didn’t figure she was a nun at all because she was hanging out wearing ordinary gear–blue jeans and old sweatshirt like my Aunt Betty who used to be a gym teacher.

But then she introduced herself and we got to talking and we hit it off straight away. I offered her one of my cheroots and it turns out sister is a keen cigar smoker. She lights one up and next thing you know she’s got a bottle of Jack Daniels and we’re sitting on the back porch of the convent having a grand old time.

As I guessed, Sister Superior is all in favor of women’s being priests so I said, “Funny you should say that Sister, but I’ve alway been in favor of men becoming nuns.”

She was a little taken aback, but then I explained it to her. “Look, do you mind if I call you Sister Chister? I think that’s kind of catchy. So anyway Sister Chister, I’m thinking, why shouldn’t I be a nun? I like the peace and quiet. I’m a bit down on my luck right now and to be frank three square meals a day is worth doing some singing for. I can help out around the place doing odd jobs, and you know what, I can sing ok, and now you don’t do that difficult Gregorian chant I think I’ll do just fine.”

“Do you know Puff the Magic Dragon?”

“Puff the Magic Dragon?! Sure. I can play that on my guitar!”

So Sister says, “You’re in. We haven’t had anybody want to join our convent for a long time and maybe this is the way to get some young blood.”

“Do you mind if I make a comment Sister?” I asked.

“If you don’t mind me saying so you gals ought to think about your dress sense. People really like to see nuns in the full habit. When I’m a nun I’m going to wear the full kit.”

“Will you wear the wimple?” She was shocked.

“You betcha sister. I think the wimple is very flattering. It shows what a nice smile you have. You know the saying, “The wimple brings out the dimple.”

“But the wimple is a sign of submission to the oppressive patriarchal hierarchical church structures!”

“Fugeddaboudit Sister! We’ll show those guys in the lace nighties a thing or two. You want another slug of Bourbon? I’m just getting started.”

“Don’t mind if I do.” tittered Sister Chister.

“What I was saying Sister is that you gals ought to get rid of those navy blue polyester dresses with the zipper up the front. They don’t do you any favors. The full habit–you know its like absolution–it covers a lot of sins.”

Sister suddenly got all serious. “Will you assist us in our campaign to make the world a better, fairer and happier place for all people?”

“You betcha Sister Chister! All we are saying is give peace a chance!”

“I think you’ll fit right in!” said Sister. “Now what are we going to call you? To start off I think you’d better keep your regular name and we’ll call you Sister Bruce.”

“Sounds good to me Sister!”

“Now let me show you to your cell.”

“I just had an idea. Instead of Sister Bruce you can just call me Mister Sister.”