Is Catholic Anglican Ecumenism Over?

Is Catholic Anglican Ecumenism Over? 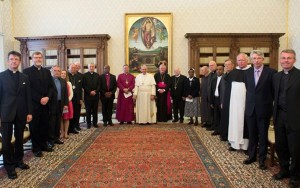 Members of ARCIC meet in Rome

Short story: never give up hope.

Last week, the Anglican-Roman Catholic International Commission (ARCIC) gathered in Rome for a further round of ecumenical discussion. Now that the Anglicans have female bishops, gay bishops, and are well along the path toward same-sex marriage, is there any point?

Cynics would argue that the ecumenical blabfest is mere window dressing. One critic likened it to those endless rounds of détente during the Soviet era in which both sides shook hands and smiled for the cameras, but were really waiting to see which side would cave first.

Pope Francis thinks otherwise. While recognizing the “grave obstacles to unity” erected by the Anglicans, in his opening remarks he told the delegates not to give up hope.

“The cause of unity is not an optional undertaking and the differences which divide us must not be seen as inevitable …. Despite difficulties, we must not lose heart, but we must trust even more in the power of the Holy Spirit, who can heal and reconcile us, and accomplish what humanly does not seem possible.”