Is Communion With Lutherans on the Way?

Is Communion With Lutherans on the Way? 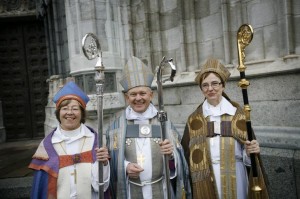 The ecumenical teams for Lutherans and Catholics have been hard at it and produced a new document on Church, Eucharist and Ministry called Declaration on the Way.

It’s all full of enthusiastic and optimistic language about how Lutherans and Catholics are all starting to agree after 500 years.

I hate to be a party pooper, but like the ecumenical talks with the Anglicans, it seems to me that we are further apart than ever before on some very key issues and that on these issues which are so divisive we are on ever widening tangents.

You remember Chesterton’s observation, “When two paths begin to diverge the gap between them always widens.”

The language of these ecumenical documents is always very elastic. The participants efforts to agree are laudable. We all want church unity, but too often they seem to be straining at gnats and swallowing camels.

In order to find “points of convergence” the dialogue masters find minor points of agreement, pump them up and then deflate the larger and more important points of disagreement that remain.

My other grumble about this sort of thing is that the language, in an attempt to be diplomatic and find points of agreement is invariably ambiguous, vague and deliberately confusing, and where it is not all this it is contradictory and illogical.

The attempts to find points of convergence must be balanced with a clear understanding of the truth. We must agree on the truth, not agree on some vague re-formulation of “belief statements.”

Here’s an example in a passage about women’s ordination for example. My comments in red.

Most Lutheran member churches of the LWF hold themselves free under the gospel to ordain women. Why is that? They see in this practice “a renewed understanding of the biblical witness” which reflects “the nature of the church as a sign of our reconciliation and unity in Christ through baptism across the divides of ethnicity, social status and gender” OK. They’re going to change the ordained ministry and admit women. (Lund Statement, § 40). At the same time, “it can be said that in general the Lutheran churches which have introduced the ordination of women do not intend a change of either the dogmatic understanding or the exercise of the ministerial office” (Ministry, § 25).OK We’ve changed the understanding of the ordained ministry but we do not intend to change the understanding of the ordained ministry. Significantly, churches in the LWF that do ordain women and those that do not have remained in communion with one another.

The Catholic Church does not consider itself as authorized to ordain women. Nevertheless, in The Ministry in the Church the international dialogue commission affirmed that the Catholic Church “is able to strive for a consensus on the nature and significance of the ministry without the different conceptions of the persons to be ordained fundamentally endangering such a consensus and its practical consequences for the growing unity of the church” (§ 25). This is gobbledegook. So the Catholics also want to have their cake and eat it. We are not going to ordain women but we think ordaining women doesn’t really matter. Really?

Most worrying about this starry eyed optimism is the head in the sand attitude of those involved in the dialogue. Both the Catholics and Lutherans involved seem blind to the fact that most Lutherans don’t give two hoots about unity with the Catholics. Continue Reading