Is Islam Divisive and Violent?

Is Islam Divisive and Violent? 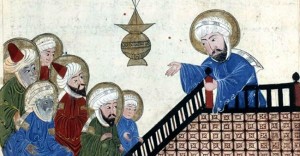 My latest blog post over at National Catholic Register reminds readers that historically, Islam was viewed not so much as a major world religion in its own right, but as a Christian schism.

The ninth ditch of Maleboge in Dante’s Inferno holds the schismatics. In his usual vividly appropriate imagery, Dante portrays the torture of the schismatics as being split in half with a demonic sword. Anthony Esolen translates Dante’s description with hellish language: “midstave split apart…so burst wide from the chin severed down to where we fart.”
It is interesting that Dante puts Muhammad and his son Ali into the circle of schismatics. He thus follows the medieval understanding of Islam as a Christian schism. The imagery is violent because schism eventually leads to violence. Notice the violence of Islam. Notice the violence of the wars of religion and centuries of revolution and bloodshed after the Protestant Revolution in Europe. When Christendom is broken, heads must roll.
As usual, in Dante’s vision the punishment fits the crime. Schismatics sin against unity and so they themselves are split asunder. The violent imagery that Dante uses reflects an inner, psychological and spiritual reality. Schism splits us asunder. It divides the Church. It divides families. It divides communities. It divides the individual. We cannot have unity within ourselves if we are out of unity with one another and with Christ’s Church.