Is the Latin Mass the Magic Bullet?

Is the Latin Mass the Magic Bullet? 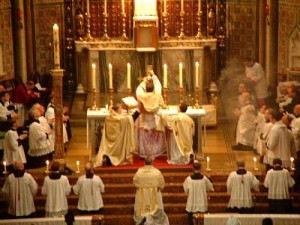 I love the enthusiasm some of my friends have for the Extraordinary Form of the Mass.

They take time and go to great expense and effort to make sure the worship of God is reverent, traditional, beautiful and transcendent.

I’m giving them a thumbs up, straight A’s, a shout out and genuine appreciation.

Unfortunately, some of the enthusiasts for the Latin Mass are their own worst enemies.

Sometimes they defend the Latin Mass in a tone of snobbish superiority, self righteousness and an undercurrent of sour negativity about other Catholics. I would not, for a moment, accuse everyone who likes the Latin Mass of such things, but it does seem that a few who put themselves forward as the most vociferous spokespeople for the Latin Mass do, too often, fulfill their opponents’ worst expectations.

Some traditionalists also seem to think that all the church’s problems would be solved if only we would all return to the Latin Mass everywhere and at all times.

While I support those who promote the Latin Mass, I must say that I find it odd that some of them seem to think the answer to all the church’s problems is more reverence at Mass. I think this is mistaking the symptom for the disease.

Simply obeying the rubrics or performing the Mass in this direction or that direction or standing here or there or wearing this particular vestment or that particular vestment or holding your fingers together there and bowing properly there do not necessarily make a Mass reverent. It makes the Mass more formal. It makes the Mass conform to the rules, but it is not the magic bullet people would wish for. Plenty of priests have ‘said the black and done the red’ and the Mass was still sloppy, irreverent and unfocused.

Does this mean I am opposed to the Latin Mass. No. I’m glad the Latin Mass is enjoying a revival. Does this mean I am in favor of polka Masses, Clown Masses and all the other extreme abuses? No. I think they’re stupid and wrong. Do I acknowledge that a formally celebrated Mass with Gregorian chant, trained servers, a good homily and fine music is better suited for Catholic worship? Of course. Do I think rubrics don’t matter? No. I think they do matter.

Here is my main point: I think those who blame all the problems of the church on the Novus Ordo are simply missing the point. If there are things wrong with the Novus Ordo they are symptoms, not causes. The core problem in the church is not the Novus Ordo or the liturgical abuses or the bad hymns and liturgical dance and all that awful stuff.

The cause is much deeper, and it did not start with Vatican II or with the introduction of the Novus Ordo. Continue Reading