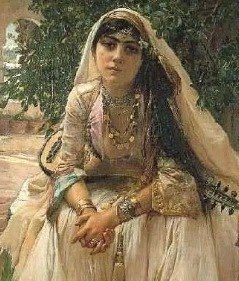 Today is the birthday of the Blessed Virgin Mary, and at mass this morning I inflicted upon the faithful the long genealogy of Jesus at the beginning of Matthew’s gospel.  It’s here if you want to read it.

I did so for a good reason.

The genealogy is a very  unusual document. Firstly, it is unusual because it includes women in the list. Usually the genealogies focus only on the men. So and so begat so and so. It’s a list of fathers and sons.

Not so the genealogy of Jesus.

The second reason it is unusual is not only that it includes women, but it includes bad women–outcasts, and sinners.

The first is Tamar, who’s story is found in Genesis 38. She was deprived of the husband she should have had, so she disguised herself as a prostitute, slept with the guy anyway, kept his personal effects, and when she was accused of prostitution she brought out his belongings saying, “This is the man.” She was a shrewd woman who worked the system and cheated her way to what she wanted.

The next woman is Rahab the mother of Boaz. First of all, Rahab was not even a Jew, but a despised Canaanite. Secondly, she was a prostitute in the city of Jericho. She helped Joshua and the Israelite spies who were planning the invasion of the promised land, and not only was her family spared in the destruction of Jericho, but the tradition says she converted to Judaism, and sure enough, there she is in the genealogy of Jesus and furthermore, she is featured in the Book of Hebrews (11:31) as being one who was justified by her faithful obedience.

Next is Ruth, a poverty stricken widow, a refugee and a Moabite. Not a Jew, but an ancestor of Jesus. When Jesus treated the Canaanite woman kindly in the gospel was he echoing an awareness that his own ancestry featured a Canaanite woman and a Moabite woman? Did he see in her Rahab and Ruth?

Then come the big black marks: David and Bathsheba. Solomon is mentioned”: “whose mother had been the wife of Uriah.” We’re talking bout the notorious story of King David lusting after his neighbor’s wife. Bathsheba. He brings her to the palace and commits adultery with her, she gets pregnant and David brings her husband Uriah home from battle to have relations with her so the child will seem to be his. Only problem is, Uriah, out of loyalty to the king and his fellow soldiers does not spend the night with his wife. David then commands that Uriah be put in the front line. He is killed and David takes Bathsheba for his favorite wife and Solomon is the child born of the union.

The genealogy of Jesus mentions all these historical characters to teach us an amazing and profound lesson. Continue Reading