Where Did Judas and Jesus Go?

Where Did Judas and Jesus Go? 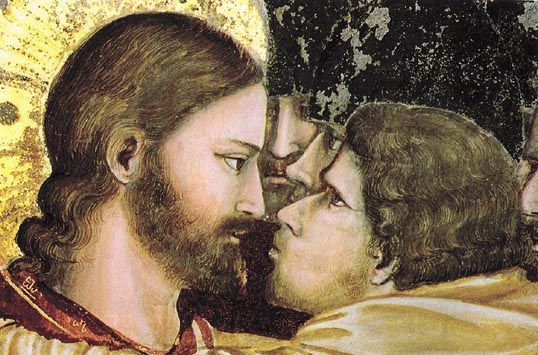 I remember a sweet story told by an Anglican bishop about Jesus’ descent into Hell.

The priest was catechizing the children and he said, “And where did Jesus go after he died?”

A little boy thought long and hard and finally he put up his hand and said, “I think he went to the deepest, darkest corner of Hell to look for his friend Judas.”

It is certainly a lovely thought, and it illustrates Christ’s everlasting love. Certainly Jesus would forgive and reconcile Judas if he could. While I want this to be true, I wonder if it really is.

This is not to doubt the mercy of God nor the saving power of Christ. Instead it is a realistic assessment of human choice and responsibility.

I believe at the root of Judas’ betrayal was self righteousness. It is there in his argument with Jesus about the expensive ointment. “This should have been sold and the money given to the poor!” I’ve heard this argument from many people. They see the expensive artwork or buildings of the church and complain that the money should be given to the poor.

In my experience such people never give their own money to the poor or to the church. They take refuge in self righteousness–and one of the hallmarks of self righteousness is to project one’s own faults on to another person.

Scholars debate about Judas’ motives. Did he betray Jesus because he wanted to kickstart the insurrection and get Jesus and his followers to react? Was he simply a pragmatist? Did he agree with Caiphas that it would be better for one man to die than for the Romans to slaughter thousands as they put down the rebellion that everyone saw coming?

In their efforts to rehabilitate Judas and somehow lessen his crime by finding a noble motive, the scholars overlook the basic fact that he was proud and self righteous. He thought he knew better than Jesus. Maybe there was no noble motive at all. Maybe his action was done out of petty jealousy because he wasn’t part of the inside circle with Peter, Andrew, James and John. Did he simply do it for the money? Did he do it to get even with Jesus?

I think the answer comes back to his self righteousness. Judas was dismayed by the adulation Jesus was receiving. Jesus was supposed to be a humble prophet. What was he doing having his feet anointed by women of questionable reputation? Jesus was supposed to be the humble preacher, but he seemed increasingly like a religious egomaniac…causing a ruckus in the temple, telling people he was the bread of life, saying they had to “eat his flesh and drink his blood.” Then at the Last Supper when Jesus said “This is my body. This is my blood of the New Covenant” Judas concluded that Jesus was setting himself up as the founder of a new version of Judaism. He was going to start a new religious sect…

I think, therefore, that Judas was a proud, self righteous, uptight religious purist. Initially he followed Jesus, but he became disillusioned with his leader and decided that Jesus was not only wrong, but dangerous. Judas was not the problem. Jesus was the problem.

So there and then at the Last Supper he struggles with his doubts and even asks Jesus, “Is it me?” When Jesus affirms this it is the last straw. The one thing the self righteous religious person cannot bear is to have his own inner darkness revealed. Shine a light on the seriously self righteous and they will snarl back. Stir up the nest of vipers and they will strike.

And so he did. He allied himself with the members of the Sanhedrin who were plotting against Jesus for the same reasons–they disagreed with him theologically and considered him to be a dangerous critic of their regime.

Notice that Judas was remorseful for what he did, but he did not repent. Remorse is not the same as repentance. Remorse is a horror at what you have done–often combined with the fear of getting caught or punished. Judas did not repent. If he had gone to Jesus and begged forgiveness he would have been forgiven.

Instead he committed suicide, and while there can be extenuating circumstances which make a suicidal soul less culpable, there are also many cases where suicide is the final sin of rebellion, pride and rejection of God’s mercy.

In a flood of remorse and self pity he takes his life.

Did Jesus go down to the deepest darkest corner of Hell looking for his friend Judas?

I’d like to think so, but the real question is whether Judas would have accepted Jesus’ friendship.