Las Vegas and the Angel of Despair

Las Vegas and the Angel of Despair 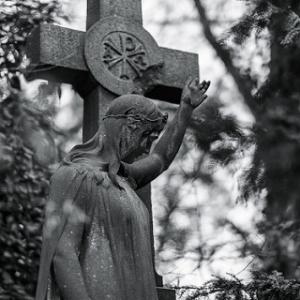 The shooting in Las Vegas must have hit most Americans as it did me. We thought we were calloused and hardened to this kind of thing.

Terrorists who drive trucks into family crowds, others who knife strangers, shoot up night clubs, churches or schools.

Despite the horror there usually seems to be some kind of motive. The mind seeks to find a reason for the madness and usually some sort of reason–no matter how insane–is found. The killer was motivated by racial hatred, the killer was a religious fanatic, the killer was high on drugs, the killer was mentally ill, the killer had a grudge against someone, some group or some nationality.

When you find the answer, no matter how horrible it is, you can begin to make some sense out of the insane killing. You never excuse it and you never justify it, but you say, “This insane person had a motive. They had a reason. They had an agenda. They had an enemy–even if the enemy was only in their own mind and produced by their own sick mind.

But this time there doesn’t seem to be any motive or reason. Who was this anonymous loser who stockpiled guns and ammo with the intent of mowing down innocent bystanders at random? This kind of violence simply defies logic or human reasoning, and even if they discover some tenuous link with a terror group, who can still make sense of it?

The only truth that one can draw from it is that Stephen Paddock was one seriously broken human being, and if him, then how many others in our fractured, desperate and wild society? How many others, like him, are middle aged to older men who came from a broken home, stumbled through a couple of marriages, made money, lost money and ended up empty and alone.

I sat in a Waffle House some time ago and happened to strike up a conversation with the woman next to me. We joked about the bad traffic and road accidents and life insurance and she happened to say that I was statistically more likely to die from suicide than any other cause. It turned out she worked as a counsellor and psychologist and she said there is an epidemic of suicide among white men in middle to old age.

This website backs her up. In the USA there are about 120 suicides a day. Half of the involve firearms. 7  out of 10 suicides are white males. The rate of suicide is highest in middle age.  This article affirms that 70% of suicides are among white males. 9/10 of them are from the lower socio economic level. According to a 2014 report the suicide rate among veterans is even higher. Around twenty vets kill themselves every day. 65% of them are aged fifty and upward.

The article goes on to muse about the causes: divorce, men bottling up their feelings, unemployment, lack of future prospects, feminism undermining male roles. There are umpteen causes of the problem.

But as a priest one phrase in the news coverage struck me hard. Stephen Paddock said his brother had no political agenda, not terrorist leanings, and “no religious affiliation.” In other words, here was a man who did not have a cause. He had nothing to live for and everything to die for. It would seem he had his gambling, his girlfriend and his money and that was about it. No religion. No faith. No love. No hope.

A man needs a vocation. He needs a cause to live for, and the tsunami of despair in our society finally erupts in a volcano of rage and violence. Stephen Paddock’s rampage is an illustration of that darkness within, and we should look around and take stock. What men are there in our lives who live day by day on the edge of despair? I know several who talk about suicide on a regular basis and who have had friends who have taken their own lives or threatened to.

However we can and with whomever we can we must take the risk and enter that darkness and somehow help those who are in emptiness and despair to somehow see the light.