Living in the Past in the Present

Living in the Past in the Present

Part of being a Catholic is to live in the past in the present.

What I am getting at is the idea that the universality of the Catholic faith means that it transcends not only particular cultural circumstances and particular locales, but it also transcends time.

Think about it. At Mass the priest comes out robed like a Roman senator. Did you know that’s where the vestments first originated?

The liturgy transcends time because even the Novus Ordo (sometimes derided by traditionalist Catholics) is deeply derived from a the liturgy of the ages. It is firmly rooted in the words and works that have been alive for 2000 years. 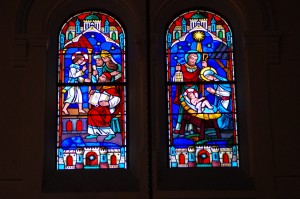 Clerestory Windows – Nativity and Presentation in the Temple

Then contemplate further, through the reading of the Old Testament and the singing of the Psalms we connect even further into the ancient religion of the Hebrews. Here is the song book of King David, there are the sagas of the patriarchs. Here is the sacrificial system, there is a the tabernacle of the desert still alive in a suburban American Catholic Church. Here are the ancient watchers and holy ones. There are the symbols of salvation that stretch back to Jerusalem and beyond.

One of the problems of American Catholicism is that we have been to quick to throw out the old stuff as so much junk from Grandma’s attic.

When I say “throw out the junk” I mean it literally.

In shopping for statues and stuff for our new church I have visited some of the ecclesiastical salvage companies. They are busy rescuing the treasures from churches that we are all busy trying to throw out.

The warehouses are full of angels and saints, boxes of pixes, cartons and crates of crosses and crucifixes, stained glass windows, marble altars, fonts and monstrances and tabors, chalices and chasubles, dalmatics and damask frontals. It’s all there as so much old fashioned junk,

One of the exciting things about the new church we are building in Greenville South Carolina is that we are rescuing this stuff. We have already purchased a complete set of stained glass windows made by the Wilbur Burnham studios in the 1940s. 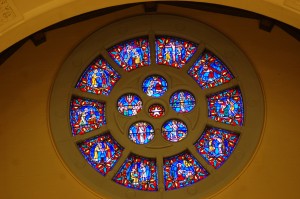 Burnham and his son were the premier stained glass craftsmen in the United States with windows in the Cathedral of St John the Divine in New York, the National Cathedral in Washington and the American Church in Paris.

Burnham was a craftsman of the old school

Wilbur H. Burnham, Sr. founded his studio in 1922. He secured his first commission from Ralph Adams Cram. On tour with his family in Europe prior to the first World War, Burnham sketched famous stained glass windows in many cathedrals. As an advocate of the medieval stained glass tradition, Burnham’s philosophical compatibilities with those of the enormously successful Cram led to commissions to provide windows for Cram’s churches in many of the major cities in North America. (Temme, 1982-1983)

Burnham’s son, Wilbur Herbert Burnham, Jr.(1913?-1984), joined the studios in the late 1930s. His education began as a child on tour with his parents in Europe and was formalized at Yale University,

Burnham claimed that his “first purpose was to give glory to God through a material which is the crowning accent to architecture.” He said, “Stained glass appeals directly to the emotions. Being more closely allied to music than to painting, it thrills and overpowers and leaves us with a sense of richness and beauty simulating the orchestration of a great symphony.”

And to think we have a set of 42 beautiful Burnham windows for our new church PLUS a fantastic rose window portraying the mysteries of the holy rosary!

Burnham’s windows are executed in the early medieval Romanesque style, preserving the past while having a sense of the modern with their stylized gestures and elongated figures. They are a living link with the past–not only the medieval past, but also the heritage of Catholics in America. 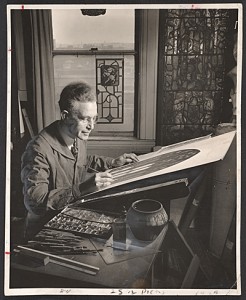 I’m proud and delighted that we are able to preserve and re-use these fine windows. In addition we hope to salvage some antique statues, we are re-finishing and restoring a beautiful antique set of the stations of the cross and also commission some new art from contemporary Catholic artists.

I should add that we are doing all this with a comparatively small parish–only 550 families and in the poorest part of town.

Will you help us with this great endeavor?

We are in the final stage of our fund raising campaign. We are aiming to raise #$650K by the end of the year and our target is in sight.

You can make an instant donation by going here to our website.

If you would like to make a sizable donation and claim one of these wonderful Burnham windows in memory of your family or another loved one, then send me an email at dlongenecker1@gmail.com and we can discuss.

If you know that to be Catholic is to live dynamically in the past in the present and wish to help preserve our Catholic heritage in a beautiful new church, then please donate today!

Go here to make your contribution.