Next up to Bat – Pius XIII?

Next up to Bat – Pius XIII? 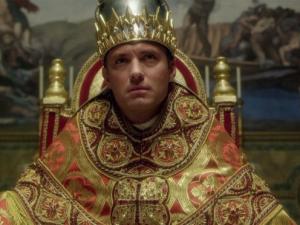 Jude Law as Pius XIII in “The Young Pope”

Richard Gaillardetz is a theology professor at Boston College, and he’s penned this insightful essay over at America Magazine.

He guides us through the development of various understandings of papal authority, and the historical overview is very interesting. He points out how Pope St John Paul II was the most prolific of papal authors, and how Pope Benedict XVI was clear that he could sometimes write as a personal theologian even while he was pope, and how Benedict was noted for participating in interviews with journalists–although questions were always submitted beforehand and answers usually prepared carefully.

Pope Francis, on the other hand, is happy to wing it. He takes part in interviews with atheist journalists and famously takes questions on his flight home from one of his apostolic visits.

Francis is fond of “making a mess” and encourages others to do the same. He is not afraid of ambiguity and a certain fuzziness in his teaching.

Gaillardetz observes this and ponders whether we are moving into a new method of papal teaching.

He summarizes his article:

With Pope Francis, gone are the days of Roma locuta, causa finita—“Rome has spoken; the matter is closed.” He recognizes that it may still be necessary on occasion to make binding doctrinal pronouncements. Yet Pope Francis appears to concur with St. John that the church may better meet the needs of the present day “by demonstrating the validity of her teaching, rather than by condemnations.” In the synodal, listening church of Pope Francis, we are witnessing the gradual emergence of a new exercise of papal teaching, one that is more patient, persuasive and dialogical. It is an exercise of papal teaching particularly attentive to the complexities and challenges of living the Gospel within the concrete conditions of daily life. It is teaching put directly to the service of discipleship.

That’s all well and good I suppose, and certainly Pope Francis has a different style than Popes John Paul and Benedict. It’s a warm, engaging and pastoral style of being pope. The problem, however is what it is doing to Francis’ ministry and–in the long run–what its doing to the papacy itself.

But before I go on to think about that I question Gaillardetz’ statement itself. He says Pope Francis’ style of teaching is one “more patient, persuasive and dialogical.” The problem with this is that many of his flock do not perceive his papacy that way at all. Pope Francis doesn’t seem patient with his critics. Witness the satirical collection of the pope’s insults that a conservative blogger has collected here. John Paul and Benedict would never have used such language and been so impatient with their critics. Does a pope who publicly insults his own flock come across as patient? Many can’t see it. Resorting to name calling and insults is “persuasive” and “dialogical”?

Theologian Gaillardetz claims Pope Francis’ style is “persuasive.” One of my friends in Rome said the pope’s management style is anything but “persuasive and patient” instead it is said this pope’s decisions are unpredictable and harsh. He demotes and dismisses his critics and does not feel obliged to give explanations. One Vatican journalist insists, “Pope Francis encourages criticism!” but fails to give examples. Pope Francis’ style is supposed to be “dialogical” but he does not seem willing to dialogue with the four cardinals who respectfully asked for clarification of his teaching, neither does he seem inclined to dialogue with those he regards as “rigid.” Apparently there was little dialogue when Cardinal Muller asked for an explanation for the dismissal of two of his colleagues.

But I may well be wrong and Pope Francis’ style is indeed “patient, persuasive and dialogical”. I am willing to be convinced.

Does this mean I am a Francis hater and an arch conservative critic of the pope? No. I think he’s a good man and a nice man. I think he loves the poor and loves the church and want to proclaim the faith to a needy world, and I like it that he has some fizz and pop in his language. I pray for the pope, but I am no ultramontanist and never have been.

However, if Gaillardetz is right that the pope’s teaching style tends toward the fuzzy wuzzy, then Pope Francis isn’t doing anybody any favors, not himself, not his papacy and not the papacy itself.

Here’s why: its really only intellectuals like Gaillardetz who care much about the pope being “listening, patient, persuasive and dialogical” Ordinary folks want something they can get their teeth into, and this has always been the strength of the Catholic Church. You know where you stood. Whether you liked it or not, whether you accepted it or not was beside the point. You might kick against it, but there was something to kick against. This is the value of clear and unambiguous moral and doctrinal teaching. If the theologians wanted to go all dialogical, then that was their job and more power to them, but ordinary pastors and people in the pew needed something solid. They want their church to be built on a rock, not on quicksand.

Does that mean that everyone who wants clear teaching is some kind of Jonathan Edwards Puritan going around condemning everyone for being naughty boys and girls,  sniffing out heresy, dangling people over hell and being generally unpleasant? Of course not, clarity and charity are not mutually exclusive, and to say those who call for clarity are legalistic Pharisees  is to resort to name calling and insults.

Saying “well modern times are different. Things are more complicated now” is hogwash. Read church history. Times have always been complicated and it has always been well nigh impossible to be a good and faithful Catholic.

The worst problem with the pope being fuzzy in his teaching is that people will simply stop listening to him.They don’t care much about ambiguous teaching which might mean this or might mean that depending on the circumstances and intentions.

The danger with the “new style of teaching” is that it isn’t really teaching at all, and Pope Francis may be on the way to being a lame duck pope–a smiling, genial old fellow who everyone thinks is rather nice when he hugs poor people and kisses babies, but they won’t take much notice of him otherwise.

If this is the way Francis’ papacy goes it will be a pity because he could have a great and good impact, but he may end up going out with a whimper not a bang.

Furthermore, his successor will find a papacy weakened and ineffectual, and the pendulum may well swing back. Who knows, next one up to bat on Peter’s team may be somebody like Jude Law’s Pius XIII.