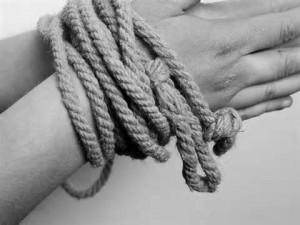 Bondage? Yep. To the Devil

Be warned that you may find some aspects of this blog post distressing.

Now that we’ve learned to be all cheerful and wholesome about sodomy it’s time to turn to sado-masochism!

Now we’re supposed to take it all up another notch and enjoy tying people up, putting them in handcuffs and spanking them with whips.

I wrote about the phenomenon here.

This nauseating article by a stupid English journalist details her visit to a “warm, dimly lit basement” where she attended a training class in sexual violence.

Erotic fiction is not a new genre, of course, but it has got darker. Mills & Boon spotted the opportunity and launched its Spice imprint, which moves on from the feverish gropings of the traditional doctor/nurse romances to explicit erotica. But James tapped into something different. Perhaps it was the economic crisis. Everything was uncertain, spiralling out of control, unmanageable. We were rendered powerless as the banks took advantage over and over. We wanted, more than anything, to take back control. James gave that urge an outlet – a means to feel powerful again, but in the bedroom, rather than via a low-interest ISA.

The revolting thing about this new trend is that it follows the trend that has been going on for the last fifty years in which Satan takes sleazy sex out of the grubby porn shops, horrible brothels, gay baths and dark back streets of our cities and pipes it into the suburbs. This is Disneyland porn–everybody looks wholesome, wealthy and well educated. They all have good jobs, a car loan and straight teeth. What used to be the stuff of sex slavery, brutality and sleazy sex dives is now the stuff of  sedate couples, postludes to romantic dinners and suburban sitting rooms.

Here is the craziest thing of all which stands everything on its head: The free for all progressives want to ban sex trafficking and prostitution because its brutal, cruel and demeaning to women, but they want us to endorse the new suburban past time of tying women up, blindfolding them and whipping them. Of course this is all supposed to be okay because everything is “consensual”.

But is an action right because everyone consents to it? I’m thinking of a case in Germany some time ago where one gay man wanted to eat another gay man and advertised for a partner in crime. They signed papers and got on with their disgusting contract, the first man killing the second (who consented in writing) and then cannibalized him. So everything’s okay if both partners consent?