On Catholicism and Killing Cops

On Catholicism and Killing Cops 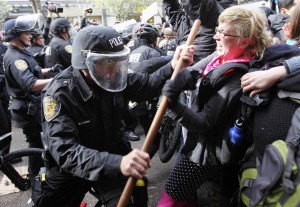 Why should anyone be surprised at the recent spate of random murders of policemen?

When a society goes bad all of it goes bad together.

The absence of Christian morals in a society soon turns into chaos and violence on the part of everyone.

Criminals on the street may be violent and irrational, but without roots in Christian morality the cops will also operate from a position of fear, rage and increasingly unbridled violence.

It goes to the top. Immoral judges will hand down unjust decisions and sentences. Corrupt politicians will create unjust, cruel and wicked laws. Immoral financiers will fleece their victims while calling them clients. Teachers and professors will teach lies and immorality because they are immoral liars. Business people will con the people they are meant to serve. Neighbors will distrust one another. Children will be corrupted and young people seduced.

The problem gets worse because, when a society loses faith and loses morality the leaders become blind. They can’t see what the real problem is. Therefore, when the society drifts into social chaos, violence and the threat of total societal breakdown they react with the only tools they have: first legislation. Lawmakers have this fantasy idea that if you make a new law it solves a problem. Never mind that it can’t be understood, or that it is a stupid law or it can’t be enforced. They think making the law alone will solve the problem.

Then when that doesn’t work they use what desperate rulers have always used: force. When the police state come the end is near. The people trade their freedoms for security and the rich and powerful dominate all because they are the ones who can afford the security guards, the surveillance systems, the police forces and the national guard.

This is why true freedom is always linked with Christian morality and Christian belief. Individuals must be convinced of the truth, beauty and goodness of the Christian faith and the only way they can do that is for them to witness it in action.

True evangelization of our culture begins with individual commitment, radically altered lifestyles and a radiantly joyful Christianity that is attractive, vibrant and real.

Nothing else will do.

Furthermore, the most exciting thing about this kind of witness is that it happens at the grass roots level.

If a thing is not local it is not real.

This is where Catholicism has the potential and power to be especially effective. Most Christians agree that it is important to live out one’s faith in a real and vital way, but Catholicism has a special kind of concrete reality. We have this infrastructure: dioceses, parishes, schools, hospitals and homes. We have a network that should be a kind of alternative system to the systems of the world. It is the system of God’s kingdom, and it is global and local at the same time.

It is by using these structures of reality that real change can happen. It is by building and growing the faith with real commitment at the local level that order can be established through love not force. It is through the alternative infrastructure of faith that peace and justice can be built using the power of love not the power of shove. It builds a society of grace not guns.