On Traveling in Clericals and Ecumenical Movement

On Traveling in Clericals and Ecumenical Movement 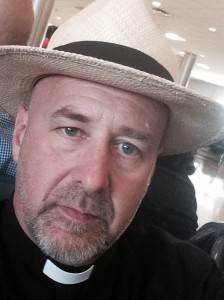 I am on my way to San Antonio to speak at the Fullness of Truth conference, and as usual I am traveling in clericals.

Seriously, I like traveling in clericals because it is a silent form of witness. “Look! There’s somebody who’s trying to give himself to God!”

But I do get into good conversations. People call me “Father” and are generally more friendly.

Little kids smile at me.

Sometimes the airport workers overlook the fact that my bag is two pounds over and put me in the fast lane for security–but that’s not why I do it.

Once I had some fella come up to me in an airport while I was having a burger who reads my blog. He sat down and got into a conversation about the  state of the church and ended up whispering his confession right there in the restaurant and after I gave him a blessing the girl who was serving tables turns out to be an Egyptian–a Coptic Christian–and she asks for a blessing. Very sweet. Very pretty. So I gave her a blessing instead of a tip…..

Today I had two conversations with Baptists who are worried about the Muslims and the end of the world. After conversations I said, “Don’t worry. Just pray. pray pray!”

I sometimes pull my rosary out and say, “This is what I use to help me pray. I recommend it.”

Maybe I should carry some extras with a little card of instruction. Anybody can pray the rosary or the Divine Mercy chaplet.

At the snack bar an African American woman said, “Are you a pastor?”

“I’m real worried about them Muslims. They hate us don’t they?”

“Well, I guess some of them do. But don’t worry. He who is for us is greater than he who is against us.”

I then told her the wisecrack from Flannery O’Connor, “I don’t think I could be a saint, but I could be a martyr if they killed me quick.”

I don’t think she got the joke.

What interests me is that Christians are one when the enemy is clear. I have written on this elsewhere in a post called “The Ecumenism of Blood”

Some Catholics tried to pick a fight with me over it…holding out against all the Protestant heretics…but they’ll change their mind I guess when they’re sitting in a detention camp with some Assembly of God types.

Who knows, they might learn to sing praise and worship songs and teach the Holy Rollers how to pray the rosary.

That’s the kind of ecumenism that makes my heart sing.