One Flock One Shepherd

One Flock One Shepherd 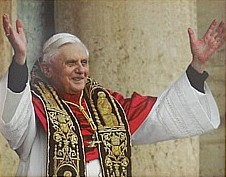 What interests me further is what Jesus does with his status as Good Shepherd. After his resurrection he has that famous conversation with Peter at the end of John’s gospel (Jn.21) where he says solemnly three times, “Feed my sheep.” The threefold command was the most binding and solemn of commandments. It was like a ritual vow–sort of the way we re-affirm our baptism vows in a threefold way.

So Jesus, the Good Shephered, solemnly hands his office over to Peter. In Peter his own prophecy comes true, “there are other sheep they do not yet know about. There is to be one flock, and one shepherd….Peter–feed my sheep.”

The command still stands today–not there will be many flocks and many shepherds, but there will be one flock and one shepherd: Jesus Christ–and until he returns again his agent on earth remains the successor of the one he chose, and his name at the moment is Benedict.