One of God’s Little Women Warriors

One of God’s Little Women Warriors 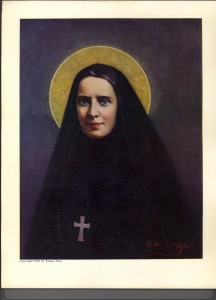 Mother Cabrini was frail and tiny of body but strong of soul. Read about her here.

Cabrini was born July 15, 1850, in Sant’Angelo Lodigiano, in the LombardProvince of Lodi, then part of the Austrian Empire, the youngest of the eleven children of Agostino Cabrini and Stella Oldini, who were wealthy cherry tree farmers. Sadly, only four of the eleven survived beyond adolescence.[2] Small and weak as a child, born two months premature, she remained in delicate health throughout her life. When she went to visit to her uncle, Don Luigi Oldini of Livagra, a priest who lived beside a swift canal, she made little boats of paper, dropped violets in them, called the flowers missionaries, and launched them to sail off to India and China.[3]

At thirteen Francesca attended a school run by the Daughters of the Sacred Heart. Five years later she graduated cum laude, with a teaching certificate.[3] After the deaths of her parents in 1870, she applied for admission to the religious congregation of the Daughters of the Sacred Heart at Arluno. These sisters were her former teachers but reluctantly, they told her she was too frail for their life.[4] She became the headmistress of the House of Providence orphanage in Codogno, where she taught, and drew a small community of women to live a religious way of life. Cabrini took religious vows in 1877 and added Xavier to her name to honor the Jesuit saint, Francis Xavier, the patron saint of missionary service.[5]

God uses the weak things of the world to confound the mighty.

Cabrini, like her near contemporary, St Therese of Lisieux, was a mighty warrior. That’s why she took the name of Francis Xavier–the great missionary soldier for Christ.