Peace or a Sword?

Peace or a Sword? 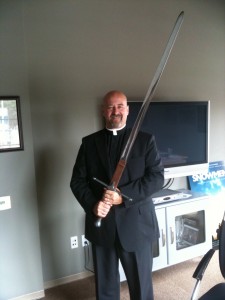 Your blogger with the sword Mel Gibson used in Braveheart

Yes it really is the sword Gibson used in Braveheart. I was in LA in a meeting with Steve McEveety about a film project and there it was in his office…

Anyway, the point is (if you’ll excuse the joke)…

From time to time I have been blamed for being divisive. Its a charge that interests me because it unlocks some other issues.

I’m reminded of that disturbing passage– Matthew 10:43 where Jesus says, “I have not come to bring peace, but a sword.” This connects in my mind with Hebrews 4:12 which says,

For the word of God is alive and active. Sharper than any double-edged sword, it penetrates even to dividing soul and spirit, joints and marrow; it judges the thoughts and attitudes of the heart.

The connection is interesting for Jesus is, of course, the Word Incarnate. Therefore he himself is “Sharper than any double-edged sword, it penetrates even to dividing soul and spirit, joints and marrow; it judges the thoughts and attitudes of the heart.”

Now we’re getting somewhere. The gospel makes distinctions and therefore it creates divisions. Is the Catholic faith divisive? Yes. It is divisive because it is true. The divisiveness of the gospel demands that we make a choice.

In this relativistic age where artificial tolerance has become the last remaining virtue, to demand a choice is a scandal and an outrage. The only choice for the tolerant is the choice of which ice cream they want. In other words, is there is no truth there is no choice other than the everyday choices of which pleasure we prefer.

“Here is some cake. Do you want a piece?”

“I’d rather not have to choose. Do you mind if I just hold off on that choice?”

Acknowledging this does not mean that you have to be some sort of caped crusader brandishing a sword and slashing about making division for divisions’s sake. But it does mean that we should understand that division will sometimes be the result of making the right choice.

There is a difficulty however. To choose wisely we must first establish a basis for our choice. In this world of swirling opinions, alternative facts, fake news, biased media and powerful propaganda there is only one choice left.

I would like to say it is the Christian faith generally, but Protestantism has disintegrated into thousands of sects each following their own opinions. Is it “divisive” to say so? Perhaps, but we should point out that Protestantism itself was divisive from the beginning and it continues to be fissiparous in the extreme.

One must find an objective, historic, intellectually reliable, philosophically substantial, practical, universal but local, intelligible and applicable source of authority. In other words, we must find a rock on which to build.

In the end, this is why I became a Catholic. It was either my opinion or the opinion of some Protestant pastor or something bigger and older.

Was my choice divisive? Yes. I was divided from friends and family. But i was united to something bigger.

Ironically then, the only way to avoid further divisions is to make a “divisive” choice: to be united on the Rock of the Catholic faith.

The answer is to make the choice to stand solidly on the historic faith grounded in the revelation of Jesus Christ, witnessed to in Sacred Scripture and expounded in the magisterium of the Catholic faith.

Here I stand. I can do no other.