Planned Parenthood: Do We Have Horror Fatigue?

Planned Parenthood: Do We Have Horror Fatigue? 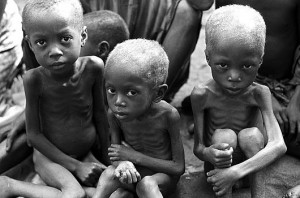 Some time ago I came across a memorable phrase: “compassion fatigue.”

At the time there had been a wave of atrocities, famines and disasters across the world.

Television and the internet brought unforgettable images into our living rooms–starving children with vultures standing by, emaciated prisoners behind barbed wire, whole town devastated by tsunamis and bodies of schoolchildren lying in a playground after a massacre.

“Compassion fatigue” was the term for realization that a human being has only so much capacity for horror. We’re busy watching a film or a variety show on television and then the news comes on and we see the starving children and reach for the popcorn and a can of pop.

We can only take so much. We feel helpless. We don’t know what we can do about the horror.

So we look the other way. We avoid the stare and squint at the glare.

We’re like the poet viewing the hordes in hell–“I did not know death had undone so many.”

I fear we are experiencing horror fatigue with video after video from the Center for Medical Progress.

In yesterday’s film a medical worker described how she was asked to snip open the face of a baby whose heart was still beating in order to harvest the brain.

What can I do? I feel helpless in the presence of such horror. The enemy seems so invincible and the problems so complex, for this is not just the problem of the crime of abortion. In many ways abortion is merely the symptom of a much, much deeper sickness in our society. Continue Reading