Polygamy, The Feds and the Gas Chambers

Polygamy, The Feds and the Gas Chambers 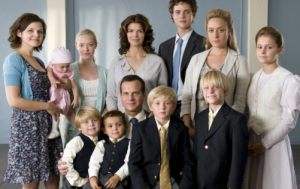 A Utah judge has ruled against a legal ban on polygamy.

Mark Gordon reports on the case here. The story is not that complicated. Kody Brown, who is a member of a fundamentalist Mormon sect is living with his four wives. The judge observes that if they were not married, but just living together in an adulterous relationship the law would have nothing to say about the situation. They’re only being prosecuted because they claim to be married, but it is impossible for the man to have more than one marriage license so, although they say they are married, in the eyes of the law they’re just living together and that’s not a crime.

In other words, if you call it polyamory and not polygamy it’s okay. Live with as many women as you like and “marry” them in your church if that pleases you, just don’t expect legal recognition of the multiple marriages.

But surely that will be challenged in the courts. Same sex couples were permitted to live together as husband and wife and nobody said “Boo” but they insisted on legal recognition of their “marriages”. Shouldn’t polygamous couples have the same right? Isn’t it unfair for three of Kody’s wives to not have legal recognition, protection under the law, insurance benefits and other privileges that spouses enjoy?

Furthermore, the arguments for polygamy are rather impressive. Those in favor would say, “This strengthens the family unit. Children have four mommies and therefore they all have more loving attention and care. Economically the family unit is stronger because there could be multiple earners. With the breakdown of the traditional extended family, large family units with multiple wives give a strong, secure and loving environment. It is difficult for one woman to be a good home maker, an extra earner, the perfect mom, a great cook, a loving companion and a perfect wife. The polygamous family allows a woman to specialize. One is a good cook, another is a good lover, another is great with child care, another is an extra earner, another is artsy and creative, who are we to judge? These seem like nice people with good family values. They are religious and are training their children in a strong, loving, happy family to have good, respectful, traditional values. Furthermore, this is a matter of their religious freedom rights. They are entitled to practice their religion freely–even if it is unusual–like the Amish, the Muslims or any other religious minority.”

How can anyone argue against that?

The underlying problem is with the argumentation. In the paragraph above I have used three types of argument: utilitarian, sentimental, and civil rights. Increasingly in cases of law and legislation these three arguments are the only ones that are used. Continue Reading