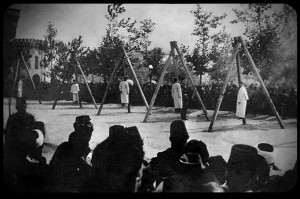 My article at Aleteia this week focusses on Pope Francis’ increasing awareness of persecution against Christians worldwide.

After speaking out about the Armenian genocide over the weekend

Francis also used the opportunity to remember other historic anti-Christian onslaughts and to condemn the rising tide of persecution against Christians in the world today. “Concealing or denying evil” the pontiff said, “is like allowing a wound to keep bleeding without bandaging it!” He repeated his claim that we are engaged even now in a third world war in which, in a piecemeal fashion, we witness slaughter, beheadings, people being driven from their homes, genocide, kidnappings, torture, murder, beheadings and crucifixions.

Pope Francis speaks about this issue not only out of a sense of outrage at injustice and compassion for the suffering, but because he has experienced injustice and cruelty firsthand.