Pope Francis and the Prophecies of Fatima

Pope Francis and the Prophecies of Fatima 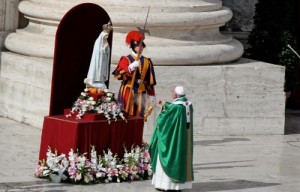 My article at Aleteia this week continues my meditations on the messages of Fatima, but focusses on the role Pope Francis plays in these events.

The Pope’s planned visit to Fatima and his celebration this week continues his interest and involvement with Fatima. His pontificate was consecrated to Our Lady of Fatima on May 13, 2013, by the cardinal of Lisbon. During the ceremony the cardinal prayed that Pope Francis be granted “the gift of discernment to know how to identify the paths of renewal for the Church.” He also prayed that the Holy Father be protected “in the difficult hours of suffering, so that he may overcome, in charity, the trials that the renewal of the Church will bring him.” This was followed five months later by Pope Francis consecrating the world to Our Lady of Fatima on October 13, 2013.

Pope Francis’ continued devotion to Our Lady of Fatima indicates a historic and significant link of the papacy with the prophecies of Fatima. John Paul II visited Fatima three times, and in 2000 beatified Jacinta and Francisco, and was also responsible for entrusting the Third Millennium to the Immaculate Heart of Mary in front of our Lady’s statue, on Sunday, October 8, 2000, when over 1,400 bishops were present for the Jubilee Mass.