Red for the Blood of the Martyrs

Red for the Blood of the Martyrs 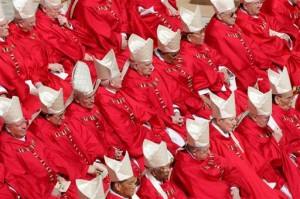 My latest article for Aleteia notices the disturbing co-incidence that the day after 20 new cardinals were created 21 new martyrs gave their lives on a Libyan beach.

There was a chilling synchronicity in the religious news this last week. On Saturday, standing with twenty new cardinals, Pope Francis made twenty-one. The next day the world was shocked by a video showing twenty-one young Coptic Christians being marched to their deaths by beheading. The now all too familiar orange jumpsuits were too jarringly similar in color to the red-orange hue of the new cardinals’ vestments. The cardinals’ colors, splendid in St. Peter’s later seemed to be splashed across the Mediterranean Sea to become the grim vestments of the twenty-one martyrs on the Libyan beach.

The comparison and coincidence is not without precedence. Tradition has it that the red color of the cardinals’ robes represents the blood of the martyrs. In February 2012 Pope Benedict affirmed this tradition. Speaking of the cardinals of the latest consistory he explained, “From now on, they devote even more to work with me in governing the universal Church, and to be witness to the Gospel to the point of sacrificing their own life. This is the meaning of the red color in their clothes.”